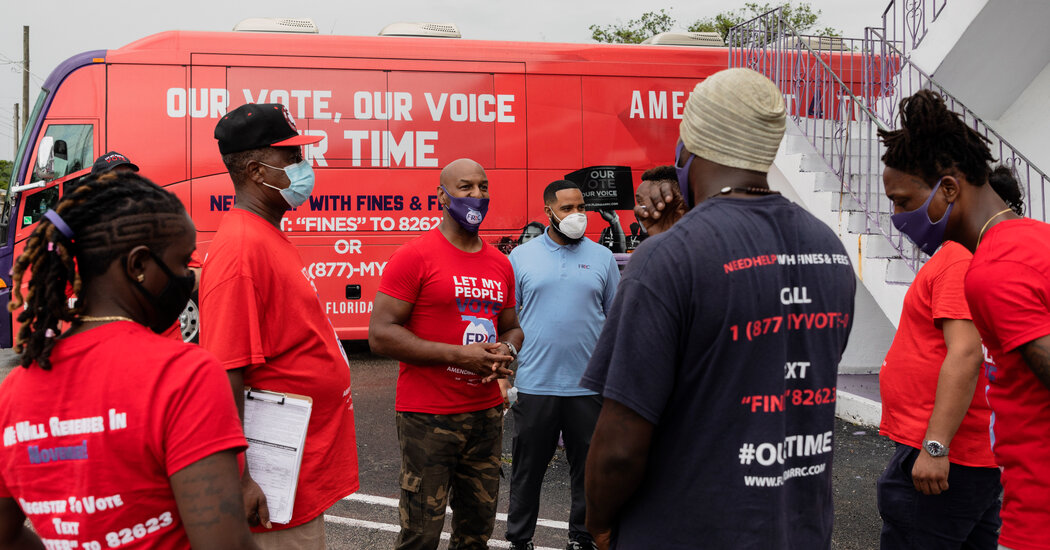 A conservative-leaning federal appeals court upheld the state’s repayment requirement last month, all but ensuring that the vast majority of “returning citizens,” as many prefer to be called, would be shut out of the ballot box this year. At least three-quarters of the roughly one million former felons in Florida owe court debts, by one estimate. Most former felons are too poor to pay them. They are also disproportionately Black.

Since the appeals court decision, donations have poured into the Florida Rights Restoration Coalition’s fund to help former felons pay off their court debts, with some $16 million raised by Michael R. Bloomberg, the former New York City mayor. Other big names, including the musician John Legend, the basketball stars LeBron James and Michael Jordan, the director Steven Spielberg and the singer Ariana Grande, have also made contributions, according to the coalition, bringing the fund-raising total to more than $20 million.

Ashley Moody, the Florida attorney general, who is a Republican, has urged law enforcement to investigate whether the donations amount to an unlawful inducement for a vote, though former felons who receive the money are not obligated to register to vote or to support a specific candidate.

Coalition leaders said they were focusing on encouraging people to register and cast a ballot, without talking about whom they should vote for. Still, some of those canvassing said that the thousands of potential voters would provide an important new voice for the interests of lower-income families and people of color in Florida, on issues like access to jobs and housing for former felons, and bail reform.

Turning the flood of recent support into names on the rolls is not a quick process. Former felons must first find out whether they owe any court debts, and if so, how much — sometimes in more than one county. The state has no uniform system that records court debt. And even when someone knows exactly what they owe, in order to pay it off, they may have to figure out which private collection agency has been assigned their debt.

“I had to do a little digging and detective work,” said Jeff Gruver, who paid off $801 in fines and fees last month after he was featured in a New York Times article and readers sent him donations. “I am overwhelmed,” he said of the response.

Mr. Gruver found the right collection agency on his second try. He then spent about half an hour navigating the agency’s online payment system. In all, cobbling together the money, finding the agency and completing the payment took him about a week, he said.