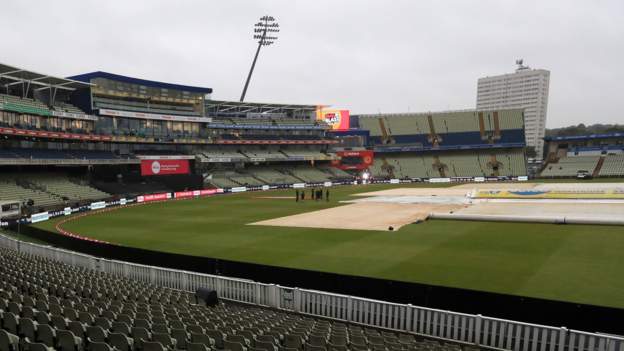 The start of T20 Blast Finals Day, already moved back 24 hours after Saturday was lost to rain, has been delayed further by more bad weather.

Persistent overnight rain at Edgbaston meant the first semi-final between Gloucestershire and Surrey, due to begin at 11:00 BST, was put back.

But brighter weather is expected later, with a 12:00 BST inspection planned.

Lancashire Lightning face Notts Outlaws in the second semi-final, before the two winners meet in the final.

It remains a possibility that three matches of five overs per side could be played in order to fit all three games in on Sunday, although a further reserve day has been scheduled for Wednesday.

Should one semi-final be completed and then further rain makes it impossible to finish the second game and/or final, they will be decided by bowl-outs.

If Finals Day does have to be moved to Wednesday, there will be no additional reserve day, and bowl-outs will, if necessary, decide which team lifts the trophy.

It is already the first time in the competition’s history that a reserve day will be needed to complete the tournament.