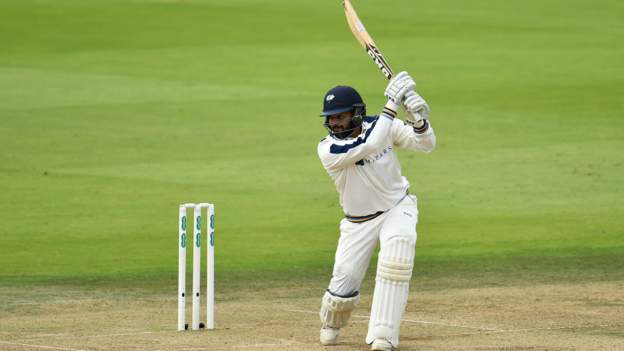 Former Yorkshire spinner Azeem Rafiq has filed a legal claim against the club after making allegations he suffered racist abuse.

Yorkshire have opened an independent investigation into those allegations.

“I hope this claim will give me the closure I need and recommendations from the tribunal will help bring change for future generations,” said Rafiq.

In a statement, Yorkshire said: “Racism has no place in our society or in our sport.

“We have taken the allegations made extremely seriously, launching a thorough, independent investigation and now await the results and recommendations from this early next year.”

Rafiq, who captained England at under-15 and under-19 age levels, is “claiming direct discrimination and harassment on the grounds of race, as well as victimisation and detriment as a result of trying to address racism at the club”.

In a press release from a communications consultancy working on behalf of Rafiq, it says the legal claim “seeks a declaration the club acted unlawfully, as well as financial damages for the harm and detriment Rafiq suffered” and “makes recommendations to ensure that changes are brought about at the club to ensure it does not happen again”.

“Those who have, like me, been on the receiving end of racism and discrimination will understand how hard it is to open up about the pain and suffering it causes,” Rafiq adds.

“I feel a sense of relief to finally speak about it and that my healing process can now begin.”

The claim is said to set out a number of allegations by Rafiq against Yorkshire, including racist language used in the dressing room towards non-white players, the club’s “failure to respect the ethnic beliefs of Pakistani players and players of Pakistani descent”, how he was “denied professional opportunities offered to white British players”, the “lack of pastoral care support” he received after his son was still born, how the club “repeatedly” ignore his claims and the “severe mental health issues” he faced as a result.

Rafiq played 169 games for Yorkshire across all formats, taking 217 wickets and scoring over 1,000 runs, including a first class century, before being released by the county in 2018.

In their statement Yorkshire added: “This is an important investigation for the club and a distressing time for all involved but with this process under way and the investigation team currently conducting interviews, it would be inappropriate for us to go into further detail on any ongoing legal matters at this stage.”