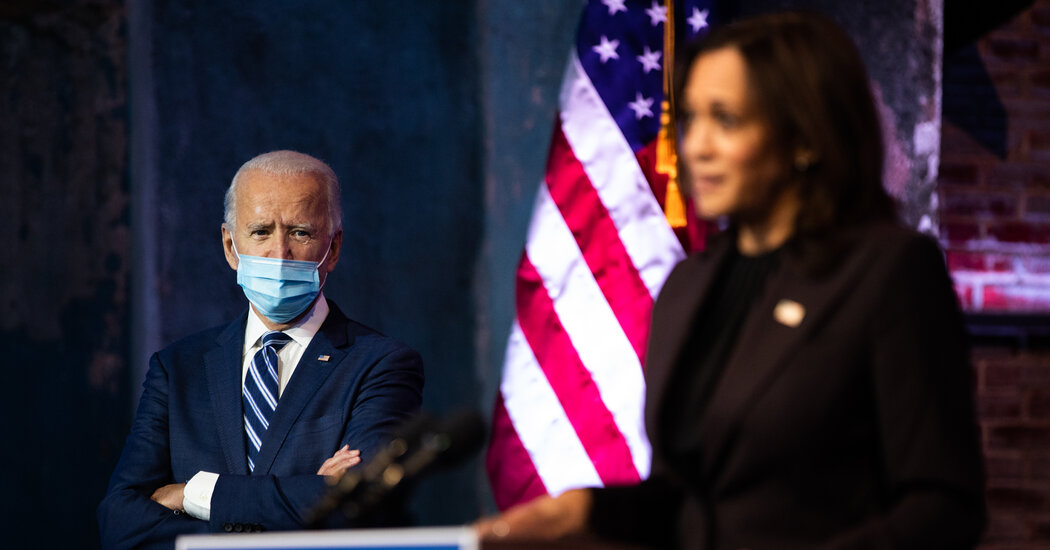 As the nation faces the twin crises of the coronavirus pandemic and an economy it has ravaged, President-elect Joseph R. Biden Jr. and Vice President-elect Kamala Harris will speak this afternoon about their long-term plans to oversee the recovery.

Mr. Biden’s remarks, delivered with Ms. Harris from Wilmington, Del., will come as the pandemic reaches new heights in the United States but as early data shows hope of an effective coronavirus vaccine. On Sunday, Mr. Biden’s pick for White House chief of staff, Ron Klain, said on NBC’s “Meet the Press” that his team’s top scientific advisers would begin consultations with officials at drug companies this week.

Mr. Klain also said that Mr. Biden spoke with Speaker Nancy Pelosi and Senator Chuck Schumer, the minority leader, on Friday about the need for urgent action on a coronavirus relief bill. Mr. Biden has yet to speak with Senator Mitch McConnell, the majority leader, Mr. Klain said.

Much of what Mr. Biden may be able to accomplish will depend on two January runoff elections in Georgia, which will determine control of the Senate. Two Democratic challengers — Jon Ossoff and the Rev. Raphael Warnock — are seeking to unseat Republicans. Mr. Klain suggested that Mr. Biden was likely to campaign in Georgia.

Regardless of the outcome in those races, Mr. Klain, a veteran Democratic operative, said that Mr. Biden already planned to quickly rejoin the Paris climate accord, protect the young undocumented immigrants known as Dreamers and act on health care.

“We’ve got a busy, busy Day 1 under any scenario here,” he said.

Reflecting the magnitude of a pair of January Senate runoffs in Georgia, President-elect Joseph R. Biden Jr. will most likely campaign in the state before he takes office and funnel personnel and resources into the two Democratic campaigns there, a top official said on Sunday.

“You’ll see the president-elect campaign down there as we get closer to Election Day,” Ron Klain, whom Mr. Biden tapped as his chief of staff last week, said on NBC’s “Meet the Press.” “We’re going to put people, money, resources down there to help our two good candidates win. I’m very hopeful that we can win those seats.”

Mr. Biden’s political engagement, at the same time he is trying to build his administration, reflects the unusual and staggeringly high stakes for his presidency in the Jan. 5 contests. Though Mr. Klain insisted victories were not a prerequisite to Mr. Biden’s agenda, snatching up both seats would give Mr. Biden’s party de facto control of the Senate, making it far easier to enact his policy agenda on the coronavirus, health care, taxes, the environment and other issues. If Republicans retain control of the chamber, they could thwart anything they did not support.

The Democratic Senate candidates themselves took slightly different approaches to discussing the implications of the race on Sunday.

Speaking on CNN’s “State of the Union,” the Rev. Raphael Warnock sought to downplay the national significance of the races. Instead, he stressed the vast wealth of his opponent, Senator Kelly Loeffler; his own experience as the pastor of Atlanta’s Ebenezer Baptist Church, which the Rev. Dr. Martin Luther King Jr. once led; and health care, the issue Democrats put at the center of most of their congressional campaigns this year.

“This race is not about me — and Chuck Schumer’s name is certainly not on the ballot,” he said, referring to the Senate Democratic leader who would take control if Democrats snatched up both Georgia seats. “I’ll tell you what is on the ballot. Health care is on the ballot. Access to affordable health care.”

Jon Ossoff, the other Democratic candidate, eagerly outlined the sweeping implications of the contests in an appearance on ABC’s “This Week.” Declaring that “Trump is leaving, whether he knows it or not,” he said victories in Georgia would give Mr. Biden that chance to meaningfully address the coronavirus pandemic and lead the country.

“With Trump departing, we have the opportunity to define the next chapter in American history, to lead out of this crisis,” he said. “But only by winning these Senate seats.”

Mr. Warnock and Mr. Ossoff are working closely together, too. But the differences in how they are talking about the race stood out as their Republicans opponents, Senator David Perdue and Ms. Loeffler, campaign as a packaged ticket, reading from the same carefully coordinated playbook that warns that Democratic victories would alter the course of the country in dangerous ways.

“We are the last line of defense against this liberal socialist agenda that the Democrats will perpetrate,” Mr. Perdue said on Fox News. “We heard Schumer say just last week, ‘If we take Georgia, we change America.’”

When President-elect Joseph R. Biden Jr. assumes the White House, repairing what has become a toxic relationship with China, the world’s second largest economy, will need to be a top priority.

The hard choices for Mr. Biden will include deciding whether to maintain about $360 billion in tariffs on Chinese imports that have raised costs for American businesses and consumers, or whether to relax those levies in exchange for concessions on economic issuesor on other fronts like climate change.

But Mr. Biden will need to walk a careful line. He and his advisers view many of President Trump’s measures, which were aimed at severing ties between the Chinese and American economies, as clumsy, costly and unstrategic. Mr. Trump placed tariffs on hundreds of billions of dollars of products from China, imposed sanctions on Chinese companies and restricted Chinese businesses from buying American technology — a multiyear onslaught aimed at forcing Beijing to change its trade practices and as punishment for its authoritarian ways.

And Mr. Trump shows no sign of letting up in his final days in office: On Thursday, he issued an executive order barring investments in Chinese firms with military ties.

Biden advisers say they want to take a smarter approach that combines working with the Chinese on some issues like global warming and the pandemic, while competing with them on technological leadership and confronting them on other issues like military expansionism, human rights violations or unfair trade.

But even if it departs from Mr. Trump’s punishing approach, the Biden administration will be eager to maintain leverage over China to accomplish its own policy goals. And the new administration will face pressure from lawmakers in both parties who view China as a national security threat and have introduced legislation aimed at penalizing Beijing for its human rights abuses, global influence operations and economic practices.

Jay Clayton, the former corporate lawyer who led the Securities and Exchange Commission during the Trump administration, will step down by the end of the year, he announced on Monday. The move was first reported in the DealBook newsletter.

In nearly four years as chairman, Mr. Clayton largely lived up to the pledge he delivered in his first speech on the job, forgoing “wholesale changes to the commission’s fundamental regulatory approach.” He presided over a regime largely free of drama or major changes at the agency — aside from a prominent battle with Tesla’s chief executive, Elon Musk.

When he was chosen to head the S.E.C. in 2017, few expected Mr. Clayton to make waves. He had spent decades as a lawyer at the white-shoe law firm Sullivan & Cromwell, working with clients like Alibaba, Barclays and Goldman Sachs. His nomination by President Trump to fill a term that expires in June 2021 was somewhat of a surprise, given that Mr. Clayton had been known for being largely apolitical.

His focus at the agency was protecting “the long-term interests of the Main Street investor,” he said. That approach surfaced in moves like stopping the car-rental company Hertz from selling stock while in bankruptcy protection and cracking down on cryptocurrency frauds.

He also expressed skepticism about the transparency of disclosures for special purpose acquisition companies, the blank-check investment funds known as SPACs that have become hot on Wall Street, echoing concerns that they may hurt ordinary investors at the expense of the savvy deal makers running them.

Critics contended that Mr. Clayton was too soft on business. But during his tenure, the commission pursued 3,152 enforcement cases, slightly more than the number brought by his predecessor, Mary Jo White, from 2013 to 2017, and also obtained orders for larger financial remedies than under the previous chief. That said, NPR reported that the S.E.C. brought just 32 insider-trading enforcement actions last year, the fewest since 1996.

The S.E.C.’s most prominent battle came when it sued Tesla in 2018 over Mr. Musk’s tweets about taking the carmaker private. It resulted in Mr. Musk stepping down as chairman and paying a $20 million fine. That same year, the commission accused Elizabeth Holmes, the founder of Theranos, of lying about her company’s blood-testing capabilities. It extracted a $500,000 settlement and barred her from serving as an executive or director of a public company for a decade, though the agency did not require her to admit guilt.

Mr. Clayton followed in the steps of many Republican leaders of the S.E.C. in pursuing deregulation. Under his watch, the commission loosened rules governing the independence of corporate auditors, adopted a conduct standard for brokers that consumer advocates argue weakened protections and proposed making most hedge funds exempt from publicly disclosing their stock holdings, generating widespread opposition.

One of the most memorable moments of Mr. Clayton’s tenure had to do with a different government post. Earlier this year, he told Attorney General Bill Barr that he was interested in becoming the U.S. attorney for the Southern District of New York, despite having never been a litigator. After Geoffrey Berman was fired from the post, a political firestorm effectively forced Mr. Clayton to back off.

It is unclear what Mr. Clayton plans to do next, though he is unlikely to take up another corporate role in the near term. Like other financial agencies, the commission is expected to get tougher on big business under President-elect Joseph R. Biden Jr.