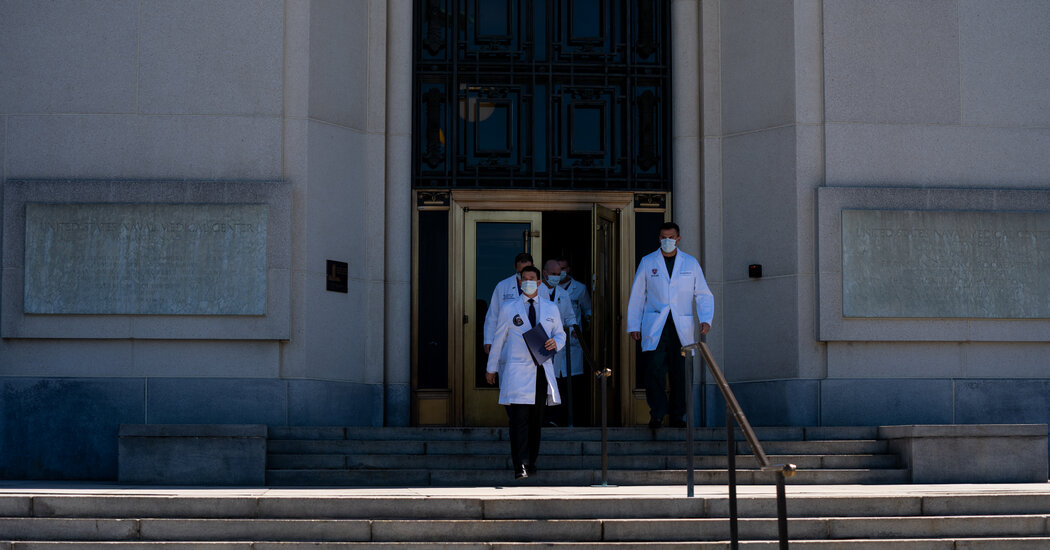 (Want to get this briefing by email? Here’s the sign-up.)

Here are the week’s top stories, and a look ahead

1. The status of President Trump’s health is raising more questions than answers after his infection with the coronavirus.

His vital signs were “very concerning” over the last day, said Mark Meadows, the White House chief of staff, contradicting a rosier picture painted by the president’s doctors at Walter Reed National Military Medical Center, above. Mr. Meadows warned that the next two days would be pivotal in determining the outcome of his illness.

3. A president’s illness might rally people behind him in ordinary times. But 2020 is anything but ordinary.

In the Trump era — and a month before Election Day — his health crisis is filtered through the partisan lenses that divide Americans on seemingly every issue. “I think it was pretty powerful that he admitted it,” said Cruz Zepeda, above, a supporter of Mr. Trump’s from Phoenix.

On the first weekend of the new Trump political reality, the overarching signals from his campaign were about continuity and resolve, despite canceled rallies. Joe Biden, who reported having a negative coronavirus test, is proceeding with in-person events. At an event in Grand Rapids, Mich., he cast his opponent’s positive test as a vivid illustration of the public health risks at play but offered Mr. Trump wishes for a speedy recovery.

The latest Times/Siena College poll found that voters in Pennsylvania and Florida had been repelled by Mr. Trump’s conduct in the first general-election debate on Tuesday. Mr. Biden maintains a lead in the two largest battleground states.

In a special edition of The Daily, we explore how Mr. Trump’s test result could affect the final days of the 2020 race — and consider what might happen next.

4. As Mr. Trump and many of his inner circle test positive for the coronavirus, the U.S. is at a crucial inflection point.

6. Britain and the E.U. entered a make-or-break phase for a long-term trade agreement.

Negotiations for the final piece of Britain’s lengthy divorce proceedings from the E.U. have ground on inconclusively for months and will now intensify as the two sides scramble to meet a deadline that would allow a deal to be in place on Dec. 31.

Prime Minister Boris Johnson and the president of the European Commission agreed that the two sides shared enough common ground to aim for a final settlement. The outcome will have profound implications for Britain’s future relationship with the E.U. The risk of a rupture is as big as it was this time last year, when negotiations on the withdrawal agreement hit a similar moment of truth.

7. The N.F.L. postponed Sunday’s highly anticipated game between the New England Patriots and the Kansas City Chiefs after positive coronavirus tests on both teams. Cam Newton, the Patriots quarterback, was reportedly among those who tested positive.

The postponement is latest in a string of positive cases in the N.F.L. The league is now feeling the consequences of its decision to start the season on time as the virus raged around the country and not to create closed communities to significantly reduce the risk of infection.

Newton is just starting to win over New England, a racially complicated area accustomed to Hall of Fame quarterback play. All it has taken are a couple of wins, endorsements from his taciturn coach and a whole lot of charm.

8. Live from New York — it was Saturday night!

The cast of “Saturday Night Live” returned with live performances last night for the first time since the pandemic shut down Studio 8H at NBC’s Rockefeller Plaza headquarters in March. Chris Rock hosted, with Megan Thee Stallion as the musical guest. Here are the highlights, including Jim Carrey as Joe Biden.

Elsewhere in New York, comedians are doing pop-up gigs wherever they can. But there were a few comedians who managed to record specials before comedy clubs went quiet in the days leading up to quarantine. Four new specials give us a snapshot of life just as we were starting to realize what the pandemic would mean.

And for more comic relief, Weird Al Yankovic teamed up with the Gregory Brothers for a musical debate recap for Opinion.

9. Not even a pandemic can stop the vibrant colors of fall.

Six writers in six states — Massachusetts, Ohio, West Virginia, Maine, Tennessee and Colorado — named their favorite drives and hikes to try this fall. Apple cider doughnuts, a highway ghost and sightings of otters, beavers and wild turkeys may be included.

Looking ahead to another fall tradition, one of our editors (who is also a dad) really likes frightening young children at Halloween. “Without tears and some light emotional scarring, Halloween is just another saccharine Hallmark holiday,” Erik Vance writes. He hopes making children tremble isn’t a thing of the past.