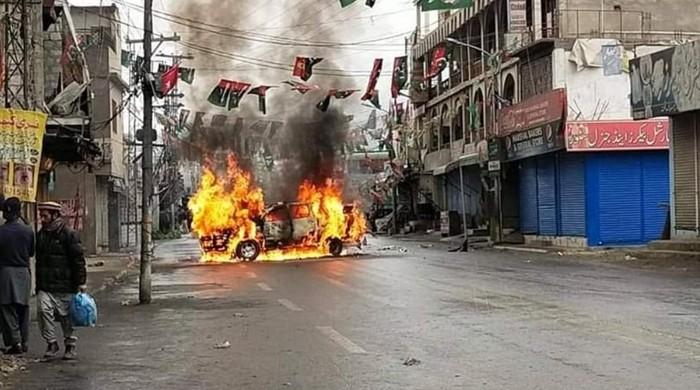 GILGIT: The workers of the Pakistan People’s Party (PPP)  here on Monday protested against the unofficial and non-finalised results of the Gilgit-Baltistan A-2, Gilgit-2 constituency, according to Geo News.

DIG Waqas Ahmed said that PPP workers have termed the polling results rigged and have held a protest demonstration against it.

Violence erupted when protesters, following a clash with police officers, set on fire a government building and four vehicles during the agitation.

According to the DIG, an estimated 20-25 people were involved in terrorism and there were reports of clashes with the police at River View Road and various other places.

However, additional police officers have been summoned in the wake of a tense situation.

Meanwhile, the PPP leader from Gilgit-Baltistan, Saadia Danish, criticised the Gilgit chief election commissioner, accusing him of hiding the results of constituency-2.

She said that it seemed as if the Gilgit election commissioner was a PTI worker, warning that his attitude would led to deterioration in the law and order situation in the area.

It may be recalled that on request of a PPP candidate, recounting of votes at all the 52 polling stations of another constituency of GBA-21, Gazar-3 is underway.