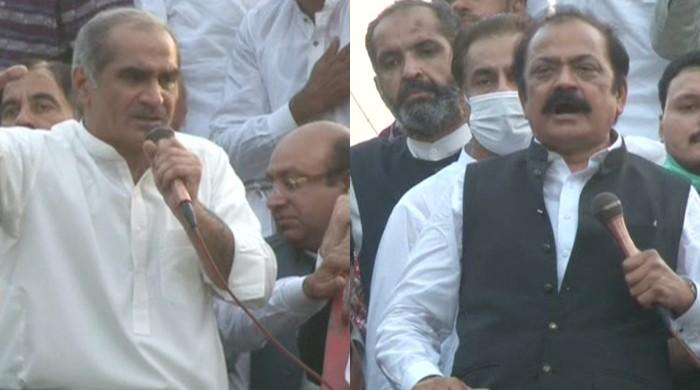 LAHORE: The PML-N on Saturday, in a power show, deplored the PTI-led government’s “revenge policy” against the Opposition as their campaign to oust the PTI from power gains momentum.

Addressing a rally held in solidarity with Shehbaz Sharif, who was arrested this week, PML-N Punjab president Rana Sanaullah, said that the government had “only taken revenge” from the Opposition after coming into power.

“Instead of providing shelter to the people, it [government] has made them homeless,” he said, adding that the huge attendance by people in the demonstration was evidence that Lahore “had woken up”.

“Shehbaz served Punjab with honesty for 10 years,” he said, adding that the government had earlier filed two cases against him, but no headway was made.

“Even if they [investigate] Shehbaz for 10 years, they won’t find anything on him,” he added.

Meanwhile, former railway’s minister Khawaja Saad Rafique said that PML-N supremo Nawaz Sharif wants the rule of democracy, and for the Constitution and law to be upheld in the country.

“What wrong has Nawaz Sharif done? He only demands that the Constitution reign supreme. He asks that people work within the limitations of the Constitution,” he said, adding: “Is this revolting against the state? Is this betrayal?”

The PML-N leader, talking about the creation of the Pakistan Democratic Movement, said that it was made after the government failed to control inflation and resolve the problems people faced.

“They haven’t jailed Shehbaz Sharif, they have incarcerated the lion of Punjab,” he said, adding that when they were out of options, the Opposition opted for PDM.

The PML-N leader said that the nation and the PML-N had tolerated the government for two years now, but the PTI only made shallow promises to the people.

“Shehbaz laid the foundation of a modern Punjab and Nawaz did the same for Pakistan […] The incumbent government has ruined Pakistan’s economy,” he said.

The former railway’s minister said that in the last two years, the government had not introduced any scheme for the welfare of the people.

“The government is not only hurting us, but it is dealing damage to the country,” he said, adding that today, there was chaos and bitterness in the entire country.

Right before Rafique’s address to the rally, the main stage of the demonstration collapsed, however, no injuries were reported.