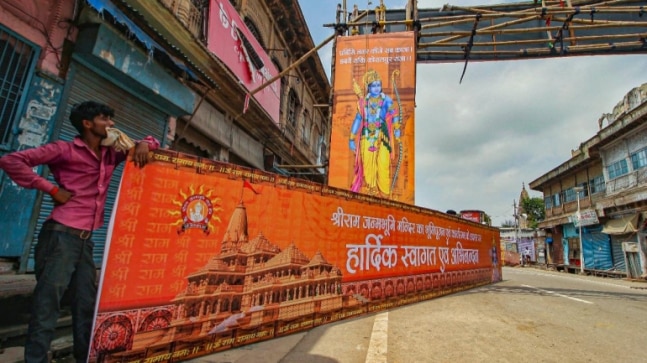 While en-route to the mega foundation laying ceremony of Ram temple in Ayodhya on August 5, PM Narendra Modi will offer prayers at the Hanumangarhi temple, a shrine dedicated to Lord Hanuman.

Preparations ahead of the grand Ram temple ceremony in Ayodhya (PTI)

Prime Minister Narendra Modi will offer prayers at the Hanumangarhi temple, a shrine dedicated to Lord Hanuman, while en-route to the mega foundation laying ceremony of Ram temple in Ayodhya on August 5, said Mahant Raju Das, the head priest of Hanumangarhi.

Ahead of PM Narendra Modi’s visit to Hanumangarhi, Special Protection Group (SPG) and administrative teams have reached the temple.

Mahant Raju Das has told news agency ANI that special mantras will be recited after the visit of PM Narendra Modi. Das said due to social distancing norms in place only four priests are likely to conduct the prayers.

According to the reports, Vedic priests will escort PM Modi to the Hanumangarhi temple while reciting special mantras. According to ANI, special prayers will be conducted for his good health and for lessening the spread of coronavirus.

Meanwhile, preparations, including cleanliness drive, are underway in Ayodhya, ahead of the foundation stone laying ceremony of the Ram Temple on August 5.

A member of the Shri Ram Janmabhoomi Teertha Kshetra trust had earlier said that PM Narendra Modi will attend the ground-breaking ceremony of the Ram temple in Ayodhya on August 5.

(With inputs from Kumar Abhishek)