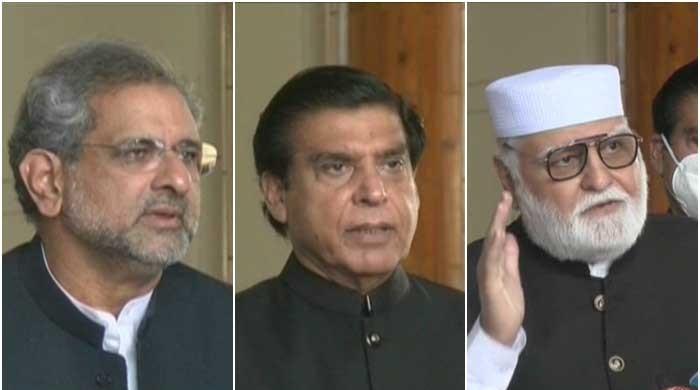 Prime Minister Imran Khan’s silence over the controversial arrest of PML-N leader retired Capt Safdar from a hotel in Karachi earlier this week has provoked the ire of Opposition leaders with former prime ministers Shahid Khaqan Abbasi and Raja Pervez Ashraf, as well as former Khyber Pakhtunkhwa chief minister Akram Khan Durrani on Wednesday questioning why the premier has not yet addressed the matter.

The PML-N leader had been taken into custody by police in the early hours of Monday after a case was registered against him for allegedly violating the sanctity of the Quaid-e-Azam’s mausoleum by raising political slogans.

Following the arrest, PML-N representatives had claimed that the police had been put under pressure to pick Capt Safdar up, with Bilawal in a press conference alleging that Sindh Inspector General of Police Mushtaq Mahar’s office had been surrounded at 2am the night of the arrest and that he was taken away at 4 in the morning.

Addressing a press conference in Islamabad today alongside Ashraf and Durrani, Abbasi said that he expresses solidarity with the Sindh government and also extended his support to Sindh Police for taking a “principled stance” on the matter.

Several senior Sindh Police officers, including IG Sindh Mushtaq Mahar, had a day earlier decided to go on leave citing demoralisation of the police force. He later announced he is deferring his leave and asked fellow police officers to set aside their applications for 10 days.

“Every citizen in Sindh is feeling insecure,” said Abbasi.

He said that had the Constitution reigned supreme, the prime minister would have made a phone call to Chief Minister Sindh Murad Ali Shah after such events transpired.

“But did the prime minister deliver a speech? Did he issue a statement?” asked the PML-N stalwart.

Addressing PM Imran Khan directly, he continued to ask: “Do you not care about the federation? Are you worried at all about the provinces?”

Abbasi then went on to say that the prime minister instead is concerned about “what food should be given to Shahbaz Sharif in jail”.

“He is completely unaware of the pain and misery of the common man,” Abbasi said of the prime minister.

The PML-N leader accused the prime minister of “resorting to any means possible to torture his political opponents”.

“We condemn all of this,” he declared.

Ashraf, addressing the media, seconded Abbasi in questioning why there had been no statement from any government representative — ministers or the prime minister himself.

“The federal government, under a planned conspiracy, seeks to spread chaos in the country,” he alleged, adding that through “systematic planning” it wants to “destabilise the country”.

Ashraf praised the manner in which PPP chairman Bilawal Bhutto Zardari and the Sindh government had handled matters a day prior.

He said that the prime minister had become irked after witnessing the scale of the gathering at the Pakistan Democratic Movement rally held in Karachi on Sunday.

Referring to the various statements by federal ministers in criticism of the rally, Ashraf said that the spokespersons are “dragging national institutions into politics”.

“The prime minister should have come forward and laid down the facts before the nation. He should have spoken to Chief Minister Sindh Murad Ali Shah,” the PPP leader said.

He said the prime minister instead “has gone into hiding and adopted an indifferent stance”.

Ashraf said that the Opposition does not aim to sow seeds of discord and instead wishes to promote unity to strengthen the nation.

Referring to the protest in front of Parliament House by various sections of society, foremost Lady Health Workers, protesting rising inflation and low salaries, he asked: “Why are our mothers and sisters sitting in front of the parliament?”

“The people of Pakistan are fed up and have come out,” he said, answering his own question, adding: “And you are not perturbed in the least.”

Referring to what the Opposition has termed as the government’s tactics to prevent it from holding mass contact campaigns, and with the arrest of Capt Safdar as the latest example, he said that cases are registered simply for holding rallies.

“The writing’s on the wall. The people have rejected your government.”

Meanwhile, Durrani said that the country is going through a “grave crisis”. “Such incidents have never before occurred in the country’s history.”

“The opposition had said on the first day that this is a fake government, they do not accept it,” he said.

The Jamiat Ulema-e-Islam-Fazl (JUI-F) leader said that there was an opinion that the oath should not be taken but then the oath was taken anyway. He said “we also gave time to the government [to reconsider]”.

“Name one mega project that has been started [by the PTI government] in the entire country,” Durrani said.

Punjab to shut down madressahs, tuition centres and schools from Nov 26