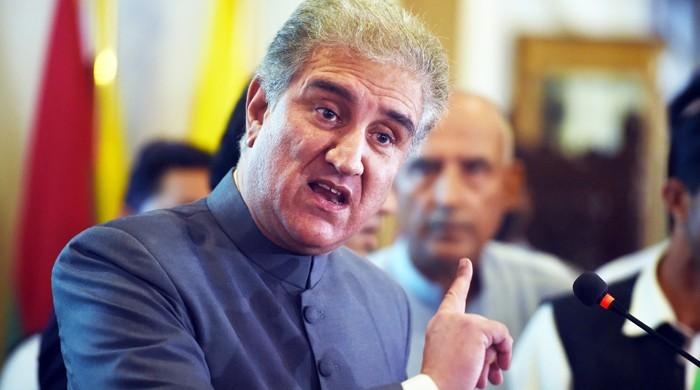 Foreign Minister Shah Mahmood Qureshi on Tuesday categorically rejected the Pakistan Democratic Movement’s (PDM) demand for PM Imran Khan to step down, describing the alliance as an “unnatural” one.

“The Prime Minister of Pakistan will not step down,” Qureshi firmly said at a press conference in Islamabad on Tuesday, adding: “Assemblies will not be dissolved.”

“The country’s affairs cannot be run at your whim,” he said, addressing the 11-party Opposition alliance. “They are not a toy to be fiddled with.”

“We do not wish to leave you hanging over this so-called deadline you have given us. That deadline stands rejected,” the foreign minister said.

Qureshi said that such demands are “undemocratic” and “unconstitutional”.

He added that the Opposition should put aside their personal agendas and present their stance on the negotiation table.

Qureshi said that the PDM is divided on the matter of the Opposition lawmakers’ resignations from parliament.

Speaking of the PPP, he said that their strategy “is not clear”. “PPP’s decisive forces were neither present in the rally nor in the meetings,” he remarked.

“PPP decisions are made by Asif Zardari, not Bilawal,” Qureshi said.

Moving on to the PML-N, he said that two factions are “clearly visible” within the party over the issue of quitting parliament.

“One side backs Shahbaz Sharif’s thinking and the other the thinking of Maryam Nawaz,” he said.

Addressing the Opposition coalition he said: “If you are serious about resignations, then resignations should reach the (National Assembly) Speaker on the 31st (of this month).”

He said that party members submitting their resignations to their respective heads is a “total sham”.

The foreign minister said that there is no consensus on a long march either. “Even today, it was said during the meeting held at Jati Umra that a meeting of the PDM will be held on February 1, where the date for the long march will be provided.”

“These people are neither united in their demand for resignations nor on the agenda of a long march.”

‘Do not blame the media for a failed rally’

Referring to the public gathering held by the PDM at the Minar-e-Pakistan ground in Lahore on Sunday, he said that “everyone saw the disengagement of the people from the PDM rally”.

He asked the Opposition why they insist on blaming the media for their own “failure to hold a successful rally”.

“Had the city of Lahore been actually mobilised, the PDM would not have faced such disappointment,” he said.

Qureshi asked why the prime minister should resign when “he has the mandate of 17 million votes”.

He said Bilawal spoke of the time for negotiations having passed but then there was talk of negotiations subject to the condition that the assemblies be dissolved.

“If you want to talk with conditions who will want to talk to you,” said the foreign minister, adding: “Threats will not work.”

“I say, son, this is inexperience. Doors do not close in politics,” Qureshi told Bilawal, also saying that if he must learn something, he “should learn from his grandfather”.

Qureshi, speaking further of the dynamic between the two leading Opposition parties, said on the one hand “Maryam bibi is in trouble and on the other hand, Bilawal is trying with all his might”.

“The time is not far when they will not be able to tolerate each other,” the foreign minister said.

He said that the PDM is an “unnatural and temporary alliance” and said that with the kind of attitude the Opposition is displaying, it will only “harm” democracy.

“There is no bigotry in politics, you find a way,” Qureshi said.

Responding to a query on ties between Saudi Arabia and Pakistan, he said Islamabad has a long standing relationship with Riyadh, which will always remain.

“Saudi Arabia has always stood by Pakistan in difficult times for which we are grateful,” Qureshi said.

He noted that the Saudi foreign minister openly supported Pakistan on the Kashmir issue at the Organisation of Islamic Cooperation (OIC).

According to Radio Pakistan, Qureshi said he will visiting Abu Dhabi and will hold talks with his UAE counterpart on Thursday.