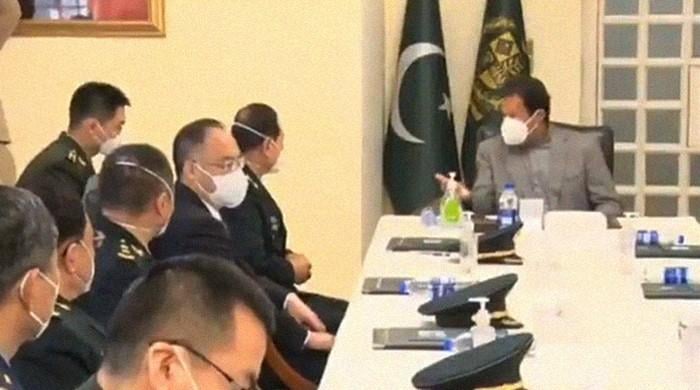 ISLAMABAD: Prime Minister Imran Khan on Tuesday apprised a delegation of top officials from China visiting Pakistan about “India’s hegemonic designs and expansionist agenda”, which were hampering peace and stability in South Asia.

The high-level delegation under China’s State Councilor and Defence Minister General Wei Fenghe is in Pakistan on a three-day official visit to further solidify and expand Sino-Pak ties — a high-level exchange that Prime Minister Imran Khan appreciated especially amid the COVID-19 pandemic.

Gen Wei relayed warm greetings from China’s President Xi Jinping and Premier Li Keqiang to PM Imran Khan, highlighting the importance that Beijing’s leadership attached to its relations with Islamabad. The prime minister warmly reciprocated the greetings and reminisced his past meetings and exchanges with the two leaders.

In today’s meeting, PM Imran Khan lauded “China’s principled support on Jammu and Kashmir in the wake of India’s unilateral and illegal actions of 5 August 2019”, when New Delhi had revoked the Muslim-majority region’s special status.

“He underlined the serious threat posed by RSS-BJP dispensation through belligerent actions, discriminatory measures against Indian minorities, and harshest steps to curb all the freedoms of innocent Kashmiris in the Indian Illegally Occupied Jammu and Kashmir (IIOJK).

“These and other steps highlighted India’s hegemonic designs and expansionist agenda, which was imperiling peace and stability in the region,” he said, according to a statement from the prime minister’s office.

The premier also underlined that the Pakistan-China ties remained an “anchor for peace and stability in the region and beyond”.

Both countries may further deepen their strategic communication and coordination to deal with the emerging challenges and threats in South Asia, as well as around the world, he added.

PM Imran Khan also spoke of the two neighbouring nations’ bond, saying there were linked by the “‘All-Weather Strategic Cooperative Partnership’ based on mutual trust, understanding and commonality of views”. He appreciated China’s consistent support to Pakistan in pursuit of the latter’s national development goals.

“Pakistan firmly adhered to One-China policy and supported China on issues of its core national interest,” he added, lauding Beijing’s development model that has lifted millions of people out of poverty and adding that Islamabad wished to emulate it.

PM Imran Khan also commended China’s success in dealing with the coronavirus pandemic and thanked its government, as well as the people, for extending solidarity and material support to Pakistan to manage the COVID-19 pandemic.

With regard to the development plans under the Belt and Road Initiative (BRI), the premier termed the China-Pakistan Economic Corridor (CPEC) “transformational”, stressing that its economic and social impact on the region would be substantially beneficial.

On the other hand, China’s Gen Wei underlined that Pakistan was his country’s close friend, good neighbour, and ‘iron brother’. The Chinese leadership was firmly committed to further strengthening the Sino-Pak ties in a host of areas, he added.

“He maintained that both countries needed to make collective efforts to protect and promote their common interests,” as per the PM Office’s statement.

Earlier in the day, President Dr Arif Alvi had met Gen Wei during the latter’s visit to the Aiwan-e-Sadr, where he underscored that Pakistan’s friendship with China was “the cornerstone of its foreign policy”.

In a statement, the President House said Dr Alvi welcomed the Chinese defence minister to Pakistan and that the two neighbouring nations “reiterated their resolve to further consolidate their friendship for the mutual benefit”.

“Pakistan’s friendship with China was the cornerstone of its foreign policy and Pakistan wanted to further improve and cement its ties with the People’s Republic of China so as to address the security challenges being faced by the region,” the president said, according to the statement.

Alvi reiterated support to China over its domestic sovereign entities and territorial disputes.

He informed the visiting Chinese delegation that “Pakistan strongly adhered to One-China Policy and supported China on issues of Taiwan, Tibet, Xinjiang and South China Sea”.

With regard to other regional issues, he and Gen Wei spoke about the Kashmir issue, as well as India’s aggression and state-sponsored terrorism.

Dr Alvi expressed concern over “the Indian hegemonic designs that posed a threat to regional peace and stability” and “highlighted India’s state-sponsorship of terrorism against Pakistan”.

The president lauded China’s economic progress and the measures it took in containing the COVID-19 pandemic.