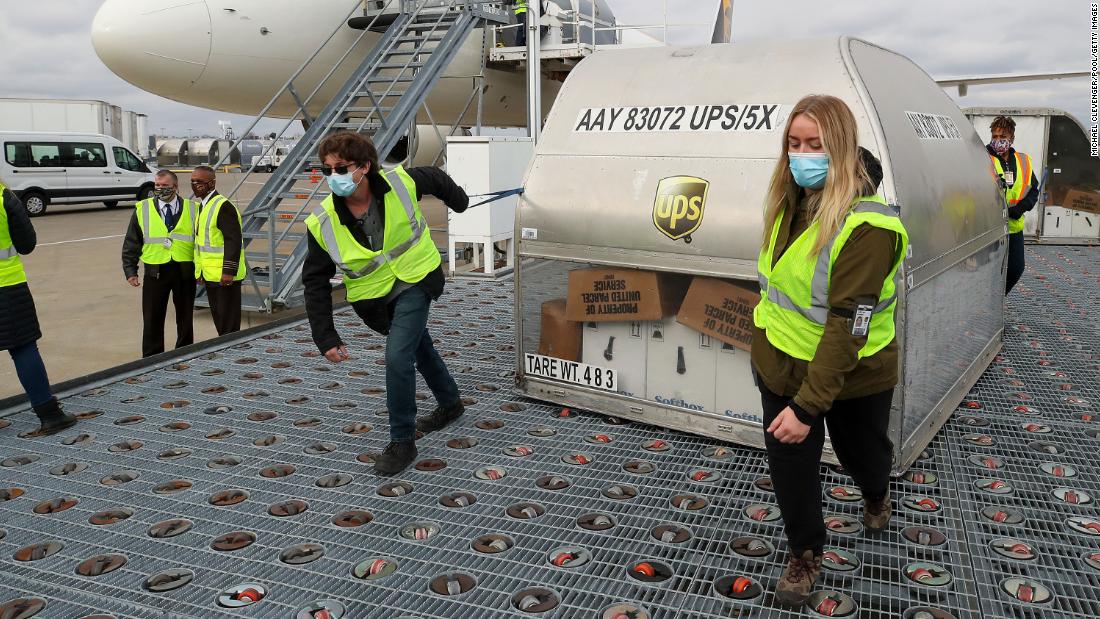 His interview comes after a weekend in which the vaccine cleared its final hurdle for US emergency use — being approved for people 16 and older — and as hundreds of thousands of vials are loaded on trucks for delivery to all 50 states.
Dr. Robert Redfield, director of the US Centers for Disease Control and Prevention, and Dr. Stephen Hahn, commissioner of the US Food and Drug Administration, have expressed hope that the immunizations begin Monday, as soon as the vials land in health care workers’ hands. Several state officials have indicated vaccinations will begin Monday.

Bourla’s remarks also come as the US is expected to soon see its coronavirus death toll hit 300,000.

No deal for US second quarter yet

The 50 million doses scheduled for distribution this year have already been manufactured, the CEO said, and half will go to the United States, while the other 25 million will go to the rest of the world.

Next year, Bourla expects US and European manufacturers to create another 1.3 billion doses. Pfizer and its partner, BioNTech, are maxing out capacity on both sides of the Atlantic, he said.

Of those, about 100 milliion will go to the States in the first quarter of 2021, per an agreement between the government and the vaccine makers, and 1.2 billion will be sent to other countries, he said.

The US government would like another 100 million doses in the second quarter, but as of right now, there is no deal in place and Bourla sees the third quarter of 2021 being a more realistic target.

“We are working very collaboratively with them to make sure that we can find ways to produce more or allocate the doses in the second quarter as well, but we haven’t signed this agreement yet,” he told CNN.

Freight trucks carrying almost 1 million doses of the vaccine left or were scheduled to leave Pfizer’s Portage, Michigan, plant Sunday, with close to 2 million more doses expected to leave Monday for a Tuesday arrival. A CNN crew saw action on the docks of the Portage plant Monday, and trucks were expected to begin rolling out in the morning.

Pfizer/BioNTech’s vaccine won’t likely be the only option. An FDA committee is reviewing a vaccine from Moderna, which is similar to Pfizer/BioNTech’s, and will discuss its emergency use authorization this week. US Health and Human Services Secretary Alex Azar, in a Monday interview with NBC, also raised the prospect of Johnson & Johnson’s and AstraZeneca’s vaccines getting approval next month.

Scale no concern, but there may be ‘bumps’

Asked if scale was a concern — if there might be issues with raw ingredients, manufacturing limitations or quality control — Bourla said there are rules demanding the highest standards of quality, and while he was concerned earlier in the process, there are “fewer worries now because already we know how to do it.”

“Although it looks like a giant step, for us it’s what we do every day, so right now I feel quite comfortable that we will be able to do it smoothly,” he said. “I’m sure that there will be bumps across the way, but also I’m certain that this is normal life for us and we will be dealing with them and we will deliver these quantities.”

The vaccine will require two injections, the second dose coming 21 days after the first. While FDA briefing documents show a 52.4% efficacy after a lone dose, Bourla said American health officials are aware of the expected impact after one dose yet maintain that people should receive the second dose. Efficacy after two doses soars to 95%.

“This was something that the both FDA and CDC considered a lot and they arrived, I think, at recommending you should complete the second dose,” he said.

It’s expected that of the first 6 million doses scheduled for American distribution, about half will remain in freezers to administer the second doses to those who receive the vaccine first.

Bourla has not received the vaccine yet, he said. An ethical committee is determining who gets the first doses, he said, and he does not want to cut in line. However, he expects to take it soon.

“I think this committee recommends that I will get vaccinated because polls that we have seen said that people will believe much more in this vaccine if the CEO is getting vaccinated so likely I will get it,” he told CNN.

Opinion: The eviction ban should remain in effect long after the pandemic is over