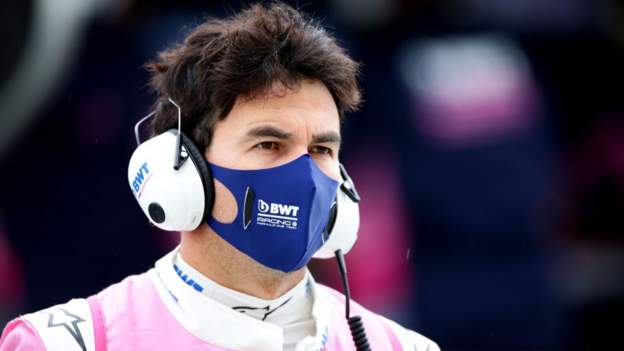 Racing Point driver Sergio Perez could race in the 70th Anniversary Grand Prix at Silverstone this weekend if he tests negative for coronavirus.

The Mexican, 30, missed last weekend’s British Grand Prix after a positive test but avoided the now-required 10-day isolation period on a technicality.

A Racing Point statement said Public Health England (PHE) had ruled he needed to isolate only for seven days.

This was the quarantine requirement when Perez first tested negative.

There had been confusion as to how long Perez would need to stay in isolation because the guidance in the UK changed overnight from seven to 10 days between his first and second tests.

This caused controversy within F1, with several senior figures feeling Racing Point should impose a 10-day isolation on Perez regardless of the technicalities of timing.

Perez is to be tested again for coronavirus on Thursday. If he is negative, he would be free to enter the paddock and potentially race.

Perez’s stand-in last weekend, Nico Hulkenberg, is at Silverstone with the team, who said they would make a decision on who would partner Lance Stroll in this weekend’s Grand Prix either later on Thursday or on Friday morning.