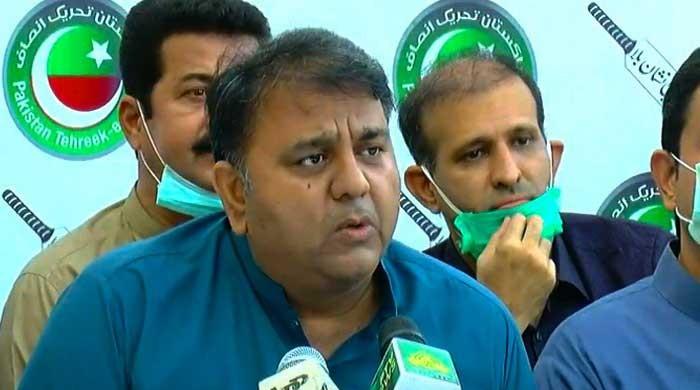 Science and technology minister Fawad Chaudhry on Sunday said that the Opposition’s Pakistan Democratic Movement is more like the “Pakistan incitement movement”.

“This movement is nearing its end before taking off. Their narrative is so flawed it’s full of holes. No one believes in it,” said the minister, at a press conference in Karachi.

Chaudhry said that it is “sad to see” that Benazir Bhutto’s party has to work under Maulana Fazlur Rehman’s leadership.

The JUI-F chief was appointed the first leader of the anti-government Pakistan Democratic Movement, in what will be a rotational arrangement from party to party. The duration of appointment has yet to be decided.

“PPP workers must be not liking the fact that the party has to make do with the killers of Benazir Bhutto,” said Chaudhry.

The minister went on to say that it is “Pakistan’s misfortune that PML-N and PPP today have to seek support of extremist groups for their politics”, in a reference to the religious parties that form the Opposition alliance against the government.

“Yesterday, in Lahore the PML-N workers had gathered but they weren’t able to gather many.

“I had advised Bilawal and PML-N that they should just book marriage halls so that it’ll be convenient and people won’t suffer (from road blockages) […] because it is only these few numbers they are able to draw,” Chaudhry said.

The minster criticised the Opposition for “looking to madressah students for their politics” and to ramp up their numbers.

“And they have a very interesting model for the movement.

“Nawaz Sharif says he wants to live in London in Mayfair, his sons have the world’s most expensive property where they seek to live, his daughter’s father in law Ishaq Dar fled when Shahid Khaqan was in power and is now in London,” the minister said.

He said all the while Nawaz has decided to live in London with his loved ones, PML-N workers “have to take to the streets and launch a movement for the government not to take away Maryam (Nawaz)’s and her daddy’s money”.

Chaudhry said the movement is “Pakistan Incitement Movement” and will fail badly like the earlier “save my father” movement. “It has no future, this grand alliance of corruption with Fazlur Rehman at the helm.”

The minister questioned why it is that Jamaat-e-Islami chief Sirajul Haq, who is also a government critic and says anti-government things every day, but “doesn’t have the resources to live a luxurious life”.

“This JI leader’s roof is leaking,” he remarked.

“Fazlur Rehman is from KP (Khyber Pakhtunkhwa) and so is Siraj. Why does the former have billions while the latter nothing?”

He said “both are leaders of religious parties” so it begs the question why this is, without elaborating any further.

‘Nawaz has no real issue with army, judiciary’

He said that the two narratives being pushed by the PML-N are that “the army is bad” and that the elections were rigged.

The minister then went on to detail how the claims are “flawed”.

“In the last election, 346 applications were filed. In Punjab, where they allege rigging took place, 13 were from PTI and 11 were from PML-N.

He said that Atif Khan lost by 50 votes, and in another place PTI lost by 117 votes.

“If the establishment was tilted towards us as they say, we would have won these 15 seats.”

“They talk about RTS going down that day, but those were constituencies where PTI lost,” the minister said.

He went on to add that in 2013, when Imran Khan spoke in the assembly for the first time as opposition leader, he launched a movement to probe four constituencies and rigging was proven in all four. “And then PTI fought the election from those and won.”

Chaudhry said that when Imran Khan became prime minister, he told Shehbaz Sharif if he thinks rigging took place then let’s form a committee. A committee was formed.

“Two-and-a-half years have passed and the PML-N has yet to provide a single shred of proof in even one constituency where they say rigging took place.”

The minister said that rigging is not the issue and it isn’t the election either.

“Nawaz Sharif has no issue with the army or judiciary. The only issue is: ‘Why don’t you cooperate with us in hiding our corruption?’,” Chaudhry said.

He alleged that Nawaz “even bought judges and established this accountability system”.

“[Nawaz] is only annoyed that the institutions did not cooperate with him,” the minister said.

He said it was the PPP and PML-N who had asked the army to assist in the polls during the caretaker government, adding that the accountability act was also made in PML-N’s tenure and all NAB employees were hired by Nawaz.

“A probe was conducted into those cases which PPP have opened against PML-N and vice versa. PTI has nothing to do with this (launching an accountability drive),” he said.

The minister claimed that 70% of PML-N members have chosen not to stand with Maryam and Nawaz because they have taken money from such institutions.

“They will come back and start working on their old salaries if PTI says it will stop all this accountability business.”

“In Punjab five MPAs have broken off and I hope more PML-N members will show courage and reject Nawaz Sharif’s narrative,” he said.

The minister said he “found out three seniors held a meeting and called media”. “They said they (top leaders) want to project like we have a fight but we only wish to negotiate.”

Chaudhry, addressing the Opposition, said: “You can criticise us (the government) but when you criticise the institutions it means you wish to shake the foundations of the state. You want to push the enemy’s narrative. And if you wish to go that far for your cases (it will only yield bad results).”