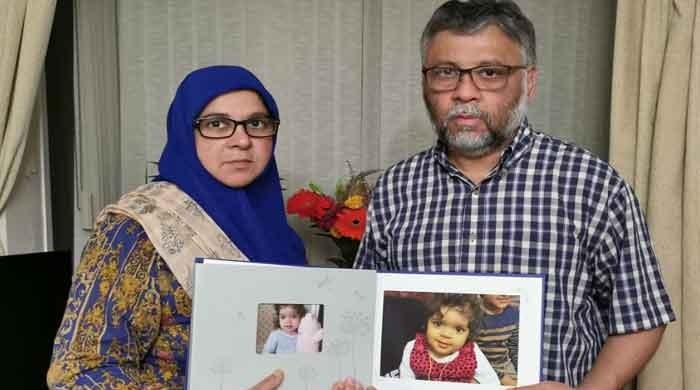 LONDON: A British Pakistani doctor who was assaulted at his child’s hospital bedside along with his doctor wife has said that he decided to speak out to save others from discrimination and hate.

Both Rashid Abbasi, a graduate of Dow Medical College Karachi, and his wife, Doctor Aliya Abbasi, were subjected to violence by the Northumbria police as they sat by their 6-year-old daughter Zainab’s bedside at a hospital while doctors wanted them to leave the room so her life support could be switched off for her to die.

The couple spoke to Geo and The News exclusively from their home in Country Durham, near the Scottish border.

The horrific footage, publicized widely on British and international media this week, shows the Pakistani doctor being dragged away from his daughter’s bedside, handcuffed and beaten by four policemen – while the local hospital’s staff stood watching after calling the police over to remove the couple from their daughter’s bedside.

Dr Abbasi said that his wife was assaulted first by the police and then he was attacked.

Zainab, 6, had complex needs due to a rare degenerative condition and doctors had told the couple that she had only a few hours to survive. She died a week after her parents were forcibly removed from the hospital exactly a year ago. There were reporting restrictions in place on the incident and the Abbasis had to fight a complex legal battle to be able to tell their story to the world and to obtain footage from the police.

Dr Abbasi explained that Zainab suffered from Niemann-Pick Disease and the after-effects of swine flu, which she contracted when she was two and then in 2018, suffered from a flare-up of her lung condition after a viral infection.

Doctors advised the couple that it would be ‘kind’ to let her go as she had no chances of surviving. However, he says the couple advised doctors on what treatment to give Zainab and on both occasions, she responded well and defied the doctors’ analysis.

Last year, the couple told the doctors not to take her off the ventilator as she was doing fine and responding well to treatment. She was hospitalized in the summer of 2019 and was put on life support at the family’s local hospital, in the north-east of England.

“Three days before the attack on us, Zainab watched three TV shows of her choice,” he told Geo News. “She was holding my hand and communicating all the time when she needed to. She was communicating through her hand movement and eyes.”

Dr Abbasi and his wife, both senior surgeons at the NHS, had a meeting with doctors for about 25 minutes where they were told that she will be put off the ventilator.

Dr Abbasi said he knew the doctors had made up their mind that they will put Zainab off the life support and that’s why he chose to remain by her side. The doctors didn’t like that, he said, and they asked the police to come and remove us.

Within minutes, four officers from the Northumbria Police arrived while Dr Abbasi was holding his daughter’s hand at her bedside; Dr Aliya Abbasi, the couple’s teenage son, sat there. The police asked the parents to step away.

Dr Abbasi told the police that being an NHS doctor, he knew about his rights and that the police had no legal grounds to remove him from there because he had done nothing wrong and was there because as a parent, he had the right to be with his daughter.

“I didn’t want to move from there because I knew that they will take my daughter off the life support. That’s exactly what they wanted to do,” he told Geo and The News. “The hospital staff lied to the police that I was being disruptive and aggressive. That’s not true. I was only standing up for my rights, for rights of my daughter.”

The first policeman dragged Dr Aliya to the floor after she asked them not to remove her husband.

“I was told that I should not speak as it was not about me but my husband. I was pinned on a chair by two security guards. They didn’t respect my rights as a Muslim woman, as a woman, [and] as a member of the public,” said Dr Aliya. “They held me back with so much force that I was left with bruises on my arms and I had to get medical treatment for the injury caused by the heavy handed security team.”

Dr Aliya said she saw how her husband was dragged down to the ground and mishandled by the police. When I cried for help they drew the curtain so I couldn’t see what the police were doing to him, she said.

“They drew the curtain while pinning me on the chair, by force, but I could hear screams of my husbands as he was beaten by the police,” she said. The police abused my husband. I requested to the police that he’s a heart patient but they didn’t care and didn’t want to listen. They were ruthless in how they treated my husband.”

“In hindsight, I believe that I would be treated very differently if I was not a Muslim and an Asian. I was wearing the hijab and that mattered,” she said. “While we were in the hospital, we saw a lot of swearing by the parents whose kids were there but the police and the hospital staff took no action. They called the police only on us, to humiliate and beat us.”

While Dr Aliya was restrained and stopped from coming to the rescue of her husband, police officers pulled her husband to the floor. He was physically restrained, his legs were strapped together, he was handcuffed and wheeled out of the area.

Dr Abbasi suffered a heart attack as the police continued to assault him. “I asked the police to let me take medicine but they refused. I told them I am a heart patient but they didn’t listen. One police officer told me that that they will let me take medicine if I behaved well. Even if was a convicted criminal, I had right to medical treatment but I was denied that right by the police.”

Dr Abbasi says he was beaten by the police. “They used their knees and elbows to hit in my chest, lower abdomen, stomach and legs with knees out of the body cam area. They made sure that they hit my knees and kicked me so that their hits are not captured on the camera. But the camera [recording] of 11 minutes tells the whole story of how I was assaulted.”

Doctor Abbasi was detained and then released after the police realized that he has suffered a heart attack. He has never been charged of any crime.

He said: “We are still living the nightmare, I still wake up in the middle of the night feeling someone is pulling a tube from my daughter and tightening my handcuffs.”

Christian Legal Aid has started to take legal action against the hospital trust and has written to the police to apologise or else face court action.

“We had the option of staying quiet but we have decided to take a stand for our Zainab and for everyone else in this country. No parent should go through what we have been made to suffer,” said Dr Abbasi. “No daughter of any parent should be denied her rights like our daughter was. We were brutalized by the police but the main blame lies with the hospital staff for telling a bogus story to the police to act against us. It’s the hospital staff that’s responsible for attack on us. We will not rest until justice [is given to us].”

The former Dow Medical College graduate confirmed he remained active in student politics and it was during his student life in Pakistan that he learnt “how to stick up for others and for your own rights”.

The trust said: “It is essential that we maintain a safe and secure environment for our patients and families. Our staff always go to strenuous lengths to ensure that families’ wishes are respected, and that they are supported as they approach the end of their child’s life, and make all possible efforts to ensure this is peaceful and dignified.”

“We responded to a call of a man being violent and abusive towards staff and that he had assaulted a consultant,” said Northumbria Police. While we recognised this was a very distressing time for him and his family, our duty was to ensure the safety of all those present.

“We are in the process of reviewing a civil claim, so it would be inappropriate to comment any further,” added police.