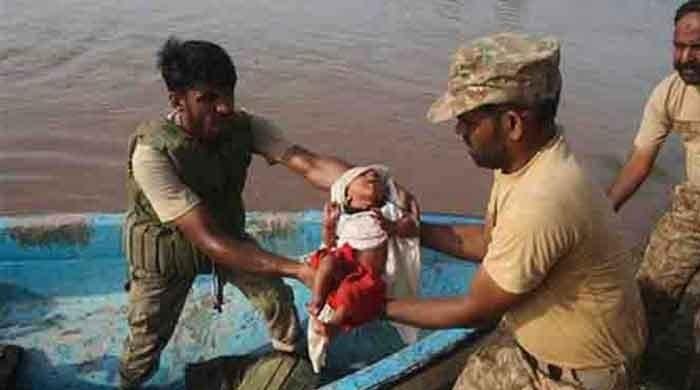 Rescue and relief efforts  by the Pakistan Army continued in Sindh’s Dadu district on  Sunday after the recent monsoon rains breached the flood protection bund of the Nai Gaj Dam and marooned people residing in surrounding areas.

According to the military’s media wing, Pakistan Army’s boats are rescuing stranded people and transporting them to “safer places”. It also said that a medical camp has been established to provide care to the affectees and hot meals were being given to people.

Meanwhile, the Provincial Disaster Management Authority of Sindh said it had dispatched six motorboats and more than 5000 rescue and relief items including tents, mosquito nets, jerrycans, water coolers and kitchen sets to Deputy Commissioner Dadu on Saturday to facilitate those affected by the flash floods in Johi area.

The PDMA also said that it was in continuous contact with the army and navy to initiate air assistance and rescue through helicopters of stranded people.

Rescue efforts by the army in Dadu had begun on Saturday after heavy rains breached the Nai Gaj Dam flooding the nearby villages.

The ISPR had said that the recent rains have caused damage to the Nai Gaj Dam, resulting in the breach of the flood protection bund of the dam. It had also said that at least 12 villages of the district were badly affected by the breach.

Earlier this week, the Pakistan Meteorological Department (PMD) had issued a warning that Karachi and lower Sindh can suffer from urban flooding in the days to come, as the fourth looming monsoon spell may wreak more havoc in the province than the earlier three spells.

The institution predicted that the fourth spell of monsoon rain in Karachi, which is forecast from August 7-8, can result in more rain than the previous three spells.

A low lying pressure system, formed in the Bay of Bengal, is expected to enter Sindh on August 6.

“Under the influence of this weather system strong monsoon currents are expected to penetrate in Sindh, South Punjab and Eastern Balochistan from Thursday (evening/night) to Saturday,” the PMD noted in its latest advisory.