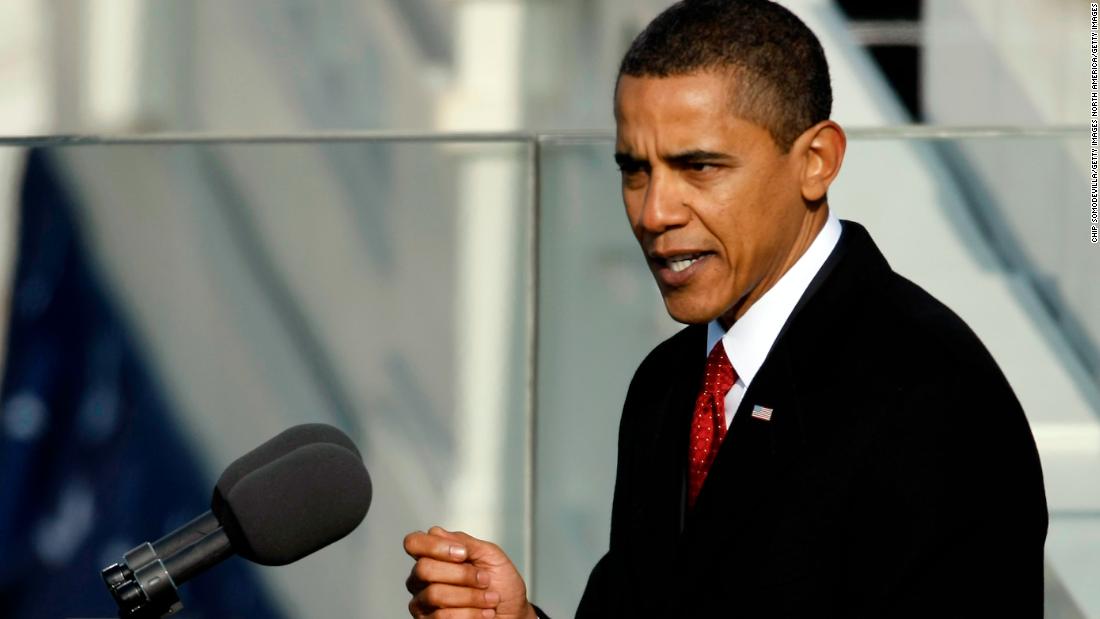 “If you believe, as I do, that we should be able to reform the criminal justice system so that it’s not biased and treats everybody fairly, I guess you can use a snappy slogan, like ‘defund the police,’ but, you know, you lost a big audience the minute you say it, which makes it a lot less likely that you’re actually going to get the changes you want done,” Obama told Peter Hamby on Snapchat’s “Good Luck America” earlier this month.
Cori Bush, who made history last month by becoming the first Black woman to represent Missouri in Congress, tweeted, “It’s not a slogan. It’s a mandate for keeping our people alive.”
Jamaal Bowman, the newly elected US representative for New York, wrote, “In 2014, #BlackLivesMatter was too much. In 2016, Kaepernick was too much. Today, discussing police budgets is too much. The problem is America’s comfort with Black death — not discomfort with slogans.”

It’s been 12 years since Obama was first elected, and the misguided hope ushered in by that event — that America had become a “post-racial” society — soon gave way to reality. The movement for racial justice took root during Obama’s second term as thousands of Americans protested the police killings of Michael Brown, Trayvon Martin, Eric Garner, Aura Rosser, Tamir Rice and others, reaching a fever pitch this summer after another string of highly publicized incidents of police brutality.

While African Americans have consistently supported the Democratic Party in large numbers throughout this time, there’s a growing segment of young Black folks and progressives from all backgrounds who have become increasingly skeptical of the piecemeal and narrow approach to addressing police brutality that characterized much of the Obama era.

There’s good reason for people to question the former president’s approach. Despite the task force Obama put together on policing in 2014, and the adoption of reforms, including anti-bias training and the expanded use of body cameras, the number of police killings has remained largely the same each year.
It has not helped that President Donald Trump rolled back the effort to reform policing when he entered office. And a study in the Journal of Epidemiology and Community Health — based on a Washington Post database that shows the number of fatal police shootings has remained relatively constant each year from 2015 and 2020 — said they indicated “a public health emergency.” During this period, researchers found that Americans lost “an annual average of 31,960 years of life,” due to fatal police shootings. The study also found that while African Americans make up 14% of the US population, they accounted for 27% of shooting deaths.
To make matters worse, Trump has also stoked racism, sided with White nationalists and militias, and showed a willingness to escalate police violence against demonstrators. When the pandemic hit, the US Centers for Disease Control and Prevention found that Black and Latinx Americans were twice as likely to die from the novel coronavirus as white people. Racial disparities in employment also mean Black Americans are less likely to have health insurance.

Taken together with the continued police killings of Black Americans, it’s no wonder that a growing constituency is calling for a bolder approach to tackle the political morass and the interlocking crises of the coronavirus, structural racism, and economic inequality.

After a cell phone video of George Floyd’s death spread around the world, millions of people took to the streets in hundreds of cities this summer — prompting many journalists, scholars, politicians and activists to call it a “reckoning” on race. Corporations issued statements proclaiming their support for social justice. Mayors commissioned “Black Lives Matter” street murals. Members of both political parties appeared receptive to change during this massive uprising.
The US House of Representatives passed the George Floyd Justice in Policing Act in June, which restricted the use of force to effectively ban chokeholds and eliminated legal protections for officers. However, the measure did not seek to reduce contact between police and citizens, which some activists believe leads to brutal encounters. Republicans, on the other hand, trumpeted their own bill that would seek to educate police departments on racism, even though it did not mandate any anti-bias measures. Both of these bills were ultimately stalled.
We are six months out from the protests and momentum has slowed. Where do we go from here? First, it is important to recognize that a true “reckoning” not only requires a deep, collective introspection about our history of structural racism, but also a “revolution of values,” described by activists such as Dr. Martin Luther King, Jr., and Grace Lee Boggs as a shift in our principles towards a more fair and just society — for everyone, especially the most marginalized. A true reckoning with racism should inspire us to seek new and transformative ways of performing justice that are grounded in more non-violent and community-based approaches to public safety.
Transformative justice is a core value that underpins the Breathe Act — a piece of legislation authored by the Movement for Black Lives’s Electoral Justice Project, which seeks to mobilize voters to support their legislation and like-minded candidates. The Breathe Act tackles the multifaceted — such as militarization of police forces and surveillance programs that plague policing — problems that plague policing by seeking to divest federal resources from incarceration and law enforcement initiatives. It also seeks to repeal federal laws that have disproportionately criminalized Black women, youth, and families and calls for an end to federal agencies like Immigration Customs Enforcement (ICE) that perpetuate harm.

The Breathe Act illustrates how the policing problem is racial and economic. Obama even appeared to acknowledge this in the discussion of defunding the police earlier this month. He said, “But if you instead say, ‘Let’s reform the police department so that everybody’s being treated fairly, you know, divert you people from getting into crime, and if there was a homeless guy, can maybe we send a mental health worker there instead of an armed unit that could end up resulting in a tragedy?’ Suddenly, a whole bunch of folks who might not otherwise listen to you are listening to you.”

When it comes to policing, we should take Dr. King’s approach to addressing poverty. “True compassion is more than flinging a coin to a beggar,” he said in his “Beyond Vietnam” speech in 1967. “It comes to see that an edifice which produces beggars needs restructuring.” The Breathe Act would be a first step in restructuring the way we approach justice in this country. Instead of locking people up, it seeks to minimize crime and overpolicing by establishing jobs programs, ensuring equitable education funding, investigating reparations and expanding Medicaid and universal childcare.

Instead of criticizing the slogan “defund the police,” or casting progressive policies as unrealistic, Democrats should focus on common ground: police killings are a problem and we expect law enforcement to solve too wide a range of problems.

We’ve tried making reforms. But the problem of police brutality is an urgent and persistent one that requires a bold vision of structural change. And the strategy must match our vision and values. If political budgets are moral documents, then divesting heavily from institutions that have the capacity to perpetuate harms is the moral thing to do.

We must join in solidarity with and support organizations across the country that already do this work like Minneapolis’s Black Visions Collective, the Detroit Justice Center, Project Nia, Study and Struggle and Survived + Punished. We can protest and push for the Breathe Act. We can engage each other in political education, have tough conversations about public safety and envision alternatives to our current system of policing. And none of this should turn off those who think incremental changes are the best we can do.

President Trump’s political ascendance following the election of the first African American President proved it’s all too easy to roll back reforms. While calls for body cameras or bias training might have seemed fitting five years ago, we need to forge a new and more humane approach to public safety. This is a long-term mission that transcends four-year election cycles. We will face serious opposition as long as Trumpism runs rampant. But the abolitionists of the 19th century and the civil rights activists also faced serious roadblocks in their efforts to destroy slavery, stop lynching and overturn Jim Crow.

The groundswell of support we saw this summer showed us a glimmer of what is possible when Americans acknowledge racism and police brutality as existential threats to our country. Complaining about protest demands will not get us closer to transforming public safety. Organizing, mobilizing into power and encouraging people to imagine more humane and community-based ways to ensure public safety can.