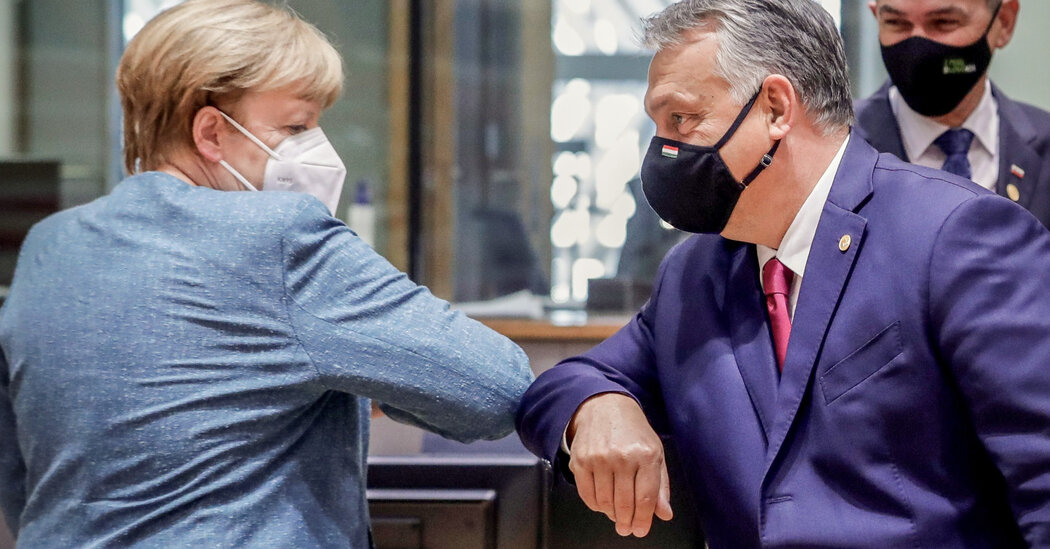 VIENNA — The philosopher Avishai Margalit was born in 1939, at the onset of World War II, and has lived most of his life in Israel, a country that has always existed between war and peace. That the value of political compromise has always occupied Professor Margalit’s thinking should come as no surprise. He is haunted by how political compromise becomes an act of political maturity and moral responsibility, and under what conditions it becomes morally unacceptable.

How might the great moral philosopher judge Chancellor Angela Merkel of Germany based on the compromise she reached with the Prime Ministers Viktor Orban of Hungary and Mateusz Morawiecki of Poland in last week’s European summit? Was this a compromise or a rotten compromise?

In the weeks leading up to the European Council summit, the governments of Poland and Hungary threatened to veto the agreed-upon European Union budget and 1.8 trillion euro recovery fund if the European Commission does not withdraw its plan to condition budgetary disbursement on adhering to the rule of law norms and principles.

Twenty-five of the 27 European Union members welcomed the rule of law conditionality as a guarantee that the money of European taxpayers would not line the pockets of government cronies. But Hungary and Poland felt that the agreed-upon “no rule of law, no E.U. money” mechanism was a breach of their national sovereignty and a breach of the E.U. treaty.

Orphaned after Donald Trump’s defeat in the United States, the Polish and the Hungarian right-wing leaders arrived at the summit wearing suicide belts. They threatened that if their demands went unheeded they would block the budget and paralyze the European Union at a critical moment amid a pandemic and economic collapse.

In the last act of the drama, Warsaw and Budapest withdrew their veto. The compromise reached was that the rule of law mechanism would be maintained but it would not be deployed before 2022, the year of the next Hungarian parliamentary elections.

Many civil society leaders urged Ms. Merkel not to compromise. The historian Timothy Garton Ash argued that, “If this shameless blackmail succeeds, the populist, xenophobic, nationalist ruling parties in Hungary and Poland will be able to go on doing pretty much what they please, being paid for it generously and, for good measure, biting the German and Dutch hands that feed them.” Opinion polls showed that the majority of Poles and Hungarians opposed their respective government’s veto, too.

For Ms. Merkel’s liberal critics, her compromise with the Hungarian and Polish leaders is emblematic of everything that is problematic with the European Union: a lack of vision, a focus on survival and a brutal realism. It amounts to betraying pro-European forces in Poland and Hungary.

Was Ms. Merkel really wrong in judging that giving money to struggling Europeans in the midst of a devastating public health crisis is a better way to defend Europe’s values than depriving illiberal governments of European funds?

My hunch is that Professor Margalit would be more sympathetic to the decision of the German chancellor than to her critics. Compromises, even when less than rotten, can never be a triumph of principles. After all, blocking the European budget when Britain appears to be about to leave the European Union without a deal could have resulted in a new wave of Euroskepticism that would threaten the very survival of the European Union.

By making a deal, Ms. Merkel has sent a strong signal to ordinary Europeans that solidarity matters when it is most needed — and exposes the emptiness of the sovereignty rhetoric coming from Warsaw and Budapest. The only thing those governments actually care about, it is now clear, is staying in power.

Many liberals tend to see Ms. Merkel’s compromise as a victory for illiberal forces in Europe. They are wrong. The Polish government barely survived after one of the political parties in the governing right-wing coalition declared the compromise “surrender.” In Hungary, pro-government propaganda declared the deal a success, but the recent and much-contested changes in the electoral law aimed at splitting the opposition are a clear sign that for the first time in a decade Mr. Orban’s re-election should not be taken for granted.

The politics of compromise is like Sumo, the ancient Japanese sport, where you win not by destroying your enemy but by pushing him out of the ring.

It will likely be years before we can determine whether Ms. Merkel’s compromise was noble or witless. It is not the refusal to make any compromises, but the ability to distinguish between a compromise and a “rotten compromise” that is at the heart of any liberal politics.

Ivan Krastev is a contributing opinion writer, the chairman of the Center for Liberal Strategies, a permanent fellow at the Institute for Human Sciences in Vienna and the author of the forthcoming “Is It Tomorrow Yet?: Paradoxes of the Pandemic.”