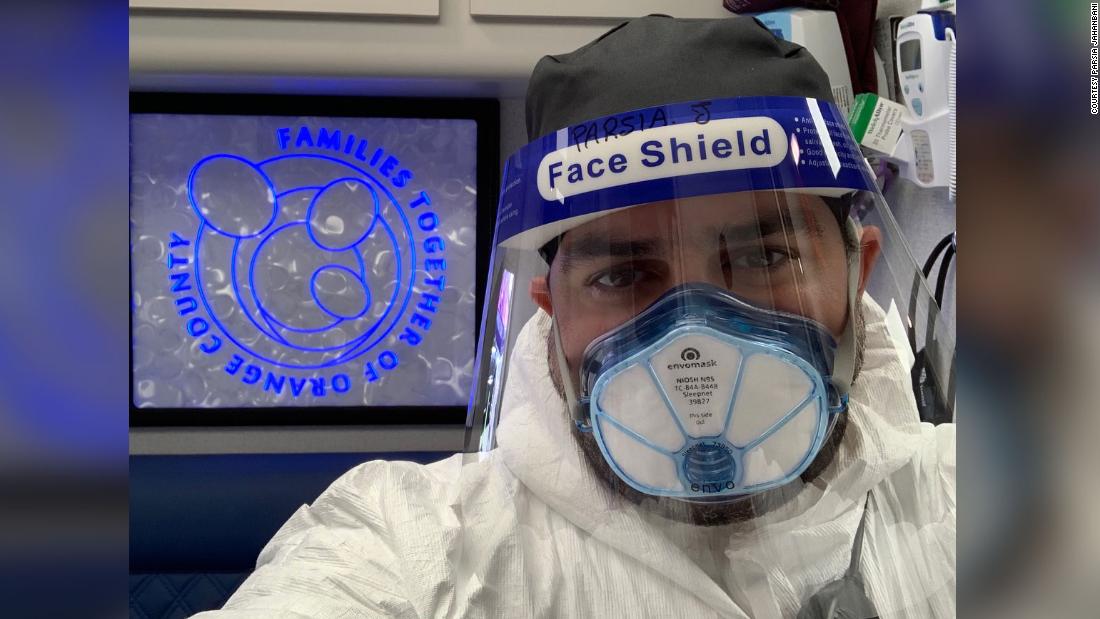 That was five or six months ago, or perhaps another lifetime. When I talked to Parsia Jahanbani in mid-August, the warmth and goodwill were gone.

Parsia works at Families Together of Orange County, a non-profit that provides medical and dental care to the underprivileged. He’s an expanded-function dental assistant — basically a dental nurse practitioner — and he drives a giant bus called a mobile medical unit to various homeless shelters. His organization lost about one-third of its staff early in the pandemic to furloughs, resignations and other factors. The pandemic makes dental work especially dangerous.

One morning, as colleagues departed, Parsia saw his 80-year-old father, the dental director, sitting behind his desk.

His father reluctantly went home, leaving Parsia to face his own dilemma at age 36. He has a rare and mysterious neurological condition called cluster headaches. These sporadic headaches come with seizures, and they’ve put him in the hospital several times. His treatment for the intermittent symptoms include immunosuppressive drugs that could increase his vulnerability to the coronavirus.

More than 30 million Americans have lost their jobs this year. Millions more, including Parsia, have been forced to answer a horrifying question: Do I want or need my job so much that I’ll keep doing it even if it might kill me?

Parsia could recall a moment from a few years earlier, when his seizures were incapacitating. He says he made a deal with God: “Give me the health to do this and I promise to serve.” And so, when the coronavirus question posed itself, Parsia answered yes.

Now he wouldn’t just do dental work. He’d be the one giving coronavirus tests. Sweating in his face shield and goggles and mask and full-body Tyvek suit, jamming swabs into the throats of strangers who coughed and sneezed all over him.

“We knew that we were risking our lives going back to work,” he said. “But I remember one day we showed up to the Salvation Army’s emergency shelter and a group of our patients that are homeless, they were on a lockdown. They couldn’t leave the shelter…And as I’m pulling up in the parking lot, I see five or six people standing behind the chain-link fence. And one of them was holding a pizza box. As we get closer, he kind of opens the lid of the pizza box. And on the top part of it, on the lid part of it, he had written, ‘Thank you.’ And the bottom part was, ‘Our medical workers.’ And he opened the box and kind of showed me the sign and the other four kind of clapped for us. And as I’m driving, I started crying. I started bawling. I couldn’t hold it back. And I turned around and told the doctor, you know, ‘This is why we’re here.'”

April, May, June. President Donald Trump encouraged armed protesters to rebel against mandatory shutdowns in Michigan. George Floyd was killed in Minneapolis. More than 1,000 health professionals signed a letter supporting the mass demonstrations that followed, leaving some Americans confused about which gatherings were safe. The coronavirus death toll surpassed 50,000; 100,000, 150,000. Across the political spectrum, people were some combination of sad, angry, tired, bored, sick of this whole nightmare of a decade of a year. National unity? A distant memory.

Parsia kept working, although no one called him a hero anymore. Among the patients who had to get tested for work, some called the pandemic a hoax. One called Parsia a communist.

“He pulled up with his car through the drive-through testing,” Parsia told me. “I’m like, ‘You are in the testing facility. You came to me. I didn’t, like, force you to come get tested. And moreover, I — if you don’t believe in the virus and everything, then why are you getting tested?…You need to wear a mask. You need to follow the instructions.’ The moment that we go to pull the swab to his face, here we go again. ‘What the f**k are you doing?…Is there something on the swab? Where are you getting the swabs from? Go grab a new one. Open it in front of me. Want to make sure that you’re not putting anything in my body.'”

Some of the anger was justified. Test kits piled up at the lab. Some patients waited a month for results, which meant the tests were useless. If they were sick, they’d been spreading it for weeks by the time they knew. Parsia was exhausted, dehydrated, sweating in the suit for 12 hours a day. One day in August he collapsed and had to go to the hospital. Back at home, he lay awake in bed with his mind racing. He worried about infecting his wife, her parents. He thought about dying. He wrote out his will.

And as he summoned the resolve to put on the Tyvek suit, Parsia thought of his father, Safaeddin Jahanbani. The captain of the ship. He’d been told to go home for his own safety at the start of the pandemic. Here’s what happened next.

“Every morning he would get up, shower, shave, put on his tie, and just sit by the dining table waiting for a call for him to go back to work,” Parsia told me. “He wanted so bad to be a part of this and help in some way…He stayed home less than a month. Towards the end of it, he was telling me, like, ‘If I don’t work for much longer, you know, then I’m gonna die.’ Right. Like, ‘No, you’re not, Dad. Come on.’ Like, ‘No, it’s this, having a purpose in life that’s keeping me going.’ And I understood that. ‘Cause even at 36, I feel the same…He says that’s the oath that he took as a doctor, to serve, to protect. To be there for patients. Because he’s like, ‘Till my last breath, I’m going to be there. I’m going to see patients. I’m going to help people.'”

And so they both went to work. I spoke with the father, Dr. Jahanbani, and he confirmed what his son told me. The signs didn’t matter to him. Only the mission did.

“This is not something to boast about, or to feel heroic,” he said. “We do it very humbly.”

He said other workers deserved appreciation: airline pilots, cashiers in grocery stores, anyone clearing tables in restaurants. And he’s right. I think of them often. All these people risking everything on a Monday morning or a Thursday night.

Firefighters and meatpacking workers. Janitors, bus drivers, schoolteachers. A courageous multitude in a fracturing nation, holding us all together.

Did John McCracken Make That Monolith in Utah?