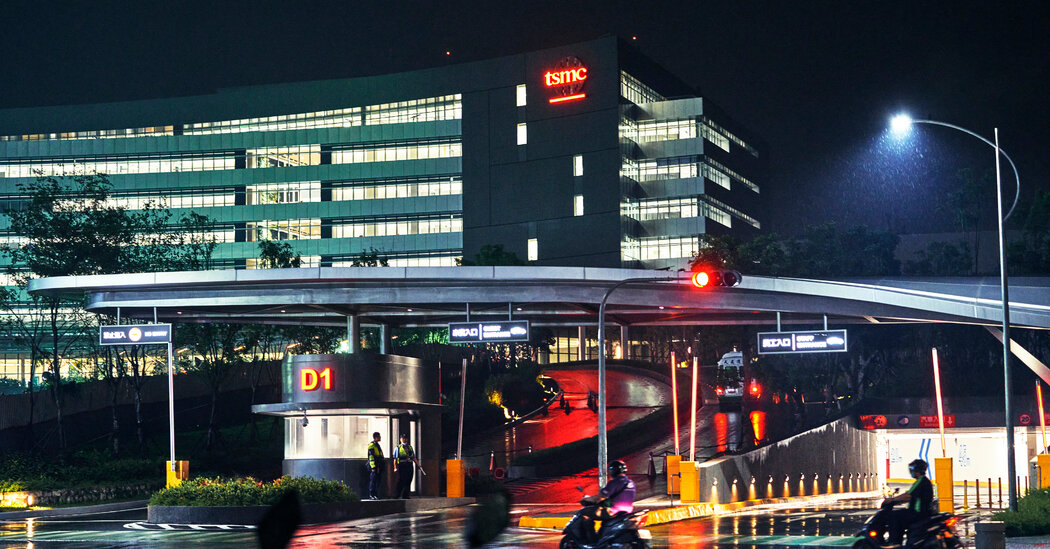 One of the Taiwanese government’s early star recruits was Morris Chang, a graduate of the Massachusetts Institute of Technology and a veteran of Texas Instruments. Tasked with building a semiconductor industry, Mr. Chang reviewed Taiwan’s strengths and weaknesses, and rejected the idea of trying to go head-to-head with global brands like Intel. Instead, he built the world’s first chip foundry, Taiwan Semiconductor Manufacturing Company, or T.S.M.C.

Much like the Taiwan contract manufacturers that once made toys and textiles, a “pure foundry” like Mr. Chang’s stayed in the background, cranking out chips for global brands rather than its own devices. Today foundries are a small corner of the $430 billion global chip market, but all of the most advanced chips come from foundries. And two-thirds of foundry production comes out of Taiwan, most of it from T.S.M.C.

Going forward, many tech analysts predict that Taiwan’s business model gives it a clear edge. Most customers prefer a pure foundry that does not compete with them to design chips or build devices, and only Taiwan offers this service. That is a big reason Apple has been switching from Samsung to T.S.M.C. for the processing chips in the iPhone and why Intel is expected to outsource production of its most advanced chips mainly to T.S.M.C.

Taiwan has tried to position itself as the “Switzerland” of chips, a neutral supplier, but it increasingly finds itself at the center of the jousting between China and the United States. U.S. sanctions against China’s leading smartphone maker, Huawei, were designed in part to block Huawei’s access to chips from T.S.M.C. Beijing responded by accelerating a campaign to build its own advanced chip plants on Chinese soil. And the Trump administration countered by inviting T.S.M.C. to build a U.S. chip fabrication plant, which will be in Arizona.

In this contest, it is not clear which superpower has the upper hand. China still relies more heavily on imports and foreign technology, but the United States is investing less aggressively in local production, and the Arizona plant won’t be nearly big enough to fill the gap. Unlike Taiwan’s other factories, which are scattered worldwide, its chip fabrication plants are concentrated on its home island, just 100 miles off the mainland coast of China. In the event of military conflict or rising tension, U.S. access to those chip fabrication plants could be vulnerable to missile threat or naval blockade.

Historically, the importance of Taiwan was calculated in geopolitical terms. A small democracy thriving in the shadow of a Communist giant stirred sympathy and support in Washington. Now, as a byproduct of its successful economic model, Taiwan has become a critical link in the global tech supply chain, adding economic weight to the geopolitical calculations. And that weight is likely to increase as the battle for global tech supremacy heats up.

Ruchir Sharma is the chief global strategist at Morgan Stanley Investment Management, the author, most recently, of “The Ten Rules of Successful Nations” and a contributing opinion writer. This essay reflects his opinions alone.

There was one winning ticket in $730 million Powerball lottery