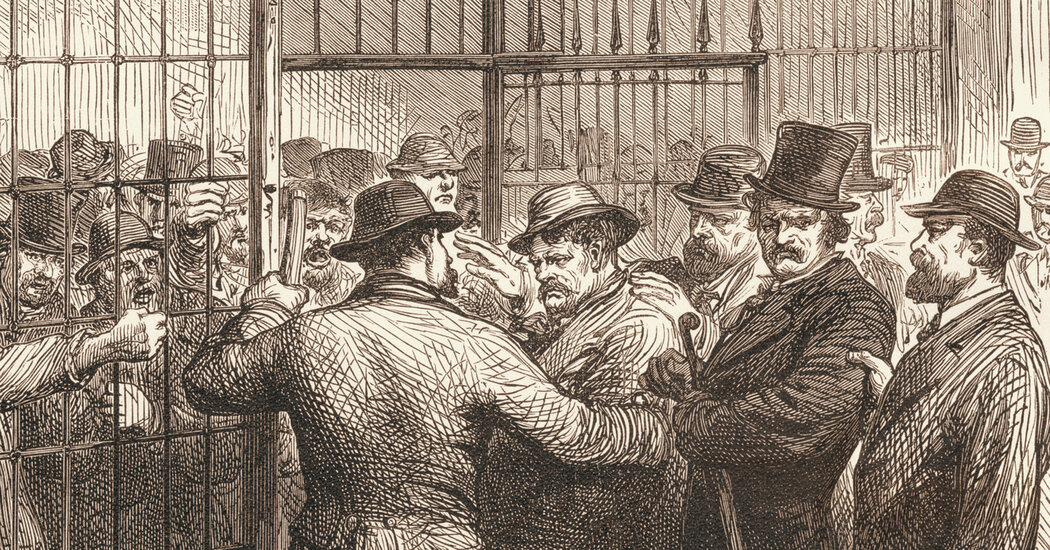 Stealing elections often started with the U.S. Postal Service — central to this election as well. In a nation that was over 80 percent rural, post offices were a choke point for political news. But they were run by deeply partisan postmasters, appointed by the very congressmen they’d help elect, and they frequently “lost” the opposition’s newspapers or correspondences. And because parties privately printed their own ballots in those days, post offices and newspaper publishers could buy up all the paper in town, making it difficult for rivals to get enough tickets. Even the telegraph wires couldn’t be trusted: In the contested presidential election of 1876, Western Union operators sent Democratic politicians’ private messages straight to Republican headquarters.

The tricks grew more confrontational on Election Day itself. Most states lacked voter registration systems, so partisans hung around the polls, challenging illegal voters — on account of age, race or residency — and intimidating legal ones they believed would vote for the rival ticket. Challenges could be oddly intimate, like the elderly Democrat in Civil War-torn Missouri who was threatened by a young man who “I have known ever since he was a child.” They could also lead to atrocious brutality. In the South at the end of Reconstruction, white Democratic rifle clubs “policed” the polls. They invented the term “bulldoze” in 1876 to describe the use of a “dose” of the bullwhip to terrorize African-American voters.

Unlike today, there actually was widespread fraud in casting ballots, what Rudyard Kipling called the uniquely American “art of buying up votes retail.” A glass of lager, $5 or a pork chop sandwich might win over a decisive minority, up to 10 percent in some states. A Norwegian immigrant in Minneapolis was struck by how open this illegal behavior was, often “considered clever and was not concealed.” But an odd code dominated this illicit activity. Jane Addams described the consequences for an unscrupulous man who sold his vote to both parties. He was punished with a Chicago-style tar-and-feathering, his head held under a blasting fire hydrant on a cold November day.

Wholesale fraud trumped buying votes retail. In big cities and new settlements where many voters were strangers, parties practiced what became known as “colonizing”: filling a district with temporary voters. Mid-Atlantic cities saw an election season shell game, with Philadelphians sent to vote in Manhattan and New Yorkers swinging Baltimore elections. In the South, elections were sometimes stolen in the opposite manner. White Democrats conspired to win north Florida in 1876 by sending a large crew of Republican African-American railroad workers to work in Alabama. Their train mysteriously broke down there, stranding them on Election Day.

Ballot fraud was even easier than moving men around, at a time when voters cast a galaxy of paper tickets. There were “tissue ballots,” so thin that a voter could cast ten folded up to look like a single vote, or “tapeworm ballots,” long and skinny to prevent dissenters from “scratching” in names of candidates not approved by the party. When parties began to color-code ballots, some used the opposition’s chosen color to fool illiterates. Among election thieves, “every body thought it was a pretty sharp trick.”