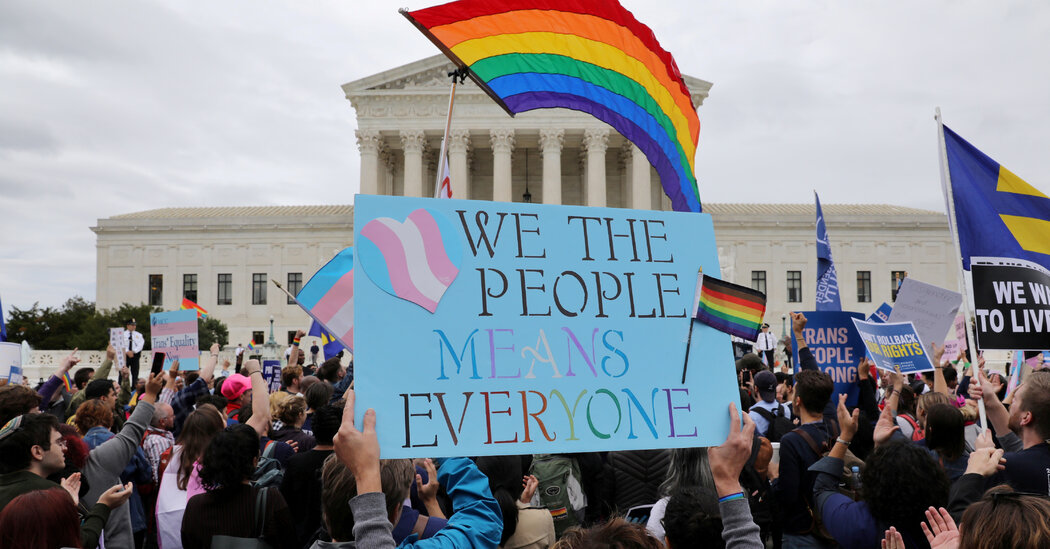 It’s not often that I get gay married. The week I did it a second time was the same week we heard about the anti-gay proclivities of the Supreme Court nominee, Amy Coney Barrett, and some current justices called into question the very ruling that allowed me to get married in the first place.

Marriage was not an option for people like me until the Supreme Court affirmed, in a 2015 civil rights case, Obergefell v. Hodges, that same-sex couples have a fundamental constitutional right to marry. It is no longer “gay marriage” but, simply and fairly, marriage.

Prop 8 passed on Election Day in November 2008, the same day that Barack Obama won the presidency. The historic Obama win was overshadowed by the poison of that ballot initiative, especially for my family.

We watched television that night in our house in the Castro neighborhood of San Francisco as election results came in. My then 6-year-old eldest son, upon hearing that Prop 8 had passed, was terrified and asked me whether our entire family — his other mom and I had married in the state years before — was now “illegal.” What a punch to the gut.

You can see why the Obergefell decision was such a keystone for us, extending the same rights and protections to all when it comes to marriage. That even includes the right to divorce, which I did in 2017.

And life will always surprise. In 2018, I unexpectedly fell deeply in love again. Within a year, I was engaged, and we had a baby in late 2019, adding a daughter to my two sons. We had hoped to have a big, noisy dance-filled wedding with scads of friends and family this past summer, but the coronavirus had other plans. A few weeks ago, we married in a tiny, socially distanced, masks-on event in an outdoor venue.

It was well timed. Just two days later, the Supreme Court declined to hear an appeal in the case of Kim Davis, the clerk in Kentucky who was sued by several couples for refusing to issue marriage licenses to same-sex couples after it was legal. Ms. Davis cited religious objections and was briefly jailed.

All of this is no big deal, right — the just end of that long struggle? Not at all.

Justices Clarence Thomas and Samuel Alito of the Supreme Court decided to weigh in and attack the Obergefell decision.

“By choosing to privilege a novel constitutional right over the religious liberty interests explicitly protected in the First Amendment, and by doing so undemocratically, the court has created a problem that only it can fix,” they wrote, noting that the ruling “enables courts and governments to brand religious adherents who believe that marriage is between one man and one woman as bigots, making their religious liberty concerns that much easier to dismiss.”

It was a warning shot — in a war that I and many others had thought was long over. And now we have the effort to seat Judge Barrett, whose views on gay rights are problematic, at best.

It was bad enough when she used the woefully outdated term “sexual preference” in referring to gay people, which she dialed back quickly when called out on it. But that was, it turned out, a mendacious feint: On Wednesday, we learned in a report by The Associated Press about her three-year service on the board of her children’s private Christian school in South Bend, Ind.

The Trinity School, which is affiliated with People of Praise, a charismatic Christian community she is also a member of, “effectively barred admission to children of same-sex parents and made it plain that openly gay and lesbian teachers weren’t welcome in the classroom,” the A.P. wrote.

Judge Barrett was not asked about this at her hearings, which concluded before the AP article was published. At the hearings, she did a good job saying absolutely nothing about her thoughts on the rights of the L.G.B.T.Q. community. I have little doubt that she will be an ally of Justices Thomas and Alito in aiming to limit or overturn the federal guarantee that same-sex couples can marry.

After hearing about Judge Barrett’s Trinity School service, my younger son asked me why a school would bar him because his parents happened to be gay.

I had no answer. That night in 2008 came rushing back to me, and I had to ask myself: Could my ever-growing family become illegal again?

It’s a frightening prospect. I assuaged my disquiet by thinking of my just-declared wife and my three children standing with me at the wedding: My younger son held our year-old baby, and my older son, now 18, read a poem, “A Gathered Distance” by Mark Tredinnick.

“How a garden hangs together — this one

an instance, like the rest of us, of us all — is how

One might cohere and carry on. A garden is never

Finished, and nor are you: Become, I think, a garden again,

I could not help but notice that this time — as he read the words about a ceaseless garden we would all need to become once again — he was not afraid.

Nurse who lost her husband and mom to Covid-19: Our family didn’t have to be gutted – CNN Video