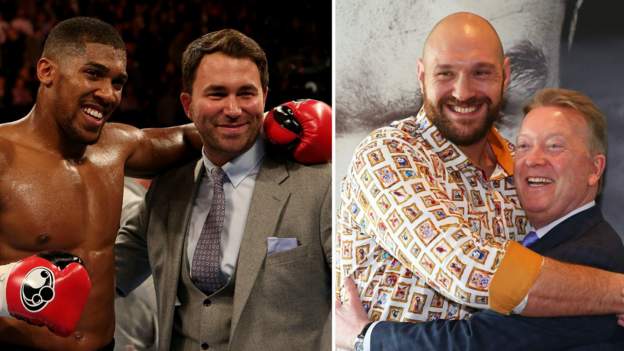 Tyson Fury’s promoter Frank Warren says the only thing that could prevent an all-British heavyweight showdown with Anthony Joshua next year are “egos”.

Joshua, 31, raised the prospect of a bout against 32-year-old Fury by knocking out Kubrat Pulev on Saturday.

“If it does happen, it will be a two-fight package and could generate between £300-500m, depending where and when it takes place,” said Warren.

“All the parties have to park their egos up.”

WBC world heavyweight champion Fury has been installed as an odds-on favourite to beat Joshua – who holds the IBF, WBA and WBO belts – if they meet next.

Negotiations are taking place for what could be the first fight in history that has all four heavyweight titles up for grabs.

Joshua’s promoter Eddie Hearn has said talks could take just “a couple of days” to complete a deal between the boxers.

There are several potential issues to overcome first, however, including the opponents-in-waiting for each fighter.

Fury may be forced to meet Deontay Wilder for a third time, while Joshua could be told by the WBO to face mandatory challenger Oleksandr Usyk.

Other issues to be resolved before the super fight can take place include where it will be staged and how it will be broadcast.

Warren pledged to work “collectively” to deliver the fight that he believes “all sports fans want to see”.

“I’m quite sure it will happen,” Warren told BBC Radio 4’s Today programme.

“The fighters want it to happen, and it’s our job – being the promoters and managers – to make sure it does happen.

“I’d love it to be in the UK, but at the moment there’s no chance of that happening, until probably next June because of the Covid restrictions.

“Other than that, it’d be taking it abroad somewhere, where they’d put up a huge site fee.”

Find out how to get into boxing with our special guide.

US Capitol on lockdown due to ‘security threat’

Lennon anger at ‘barrage of hypocrisy’