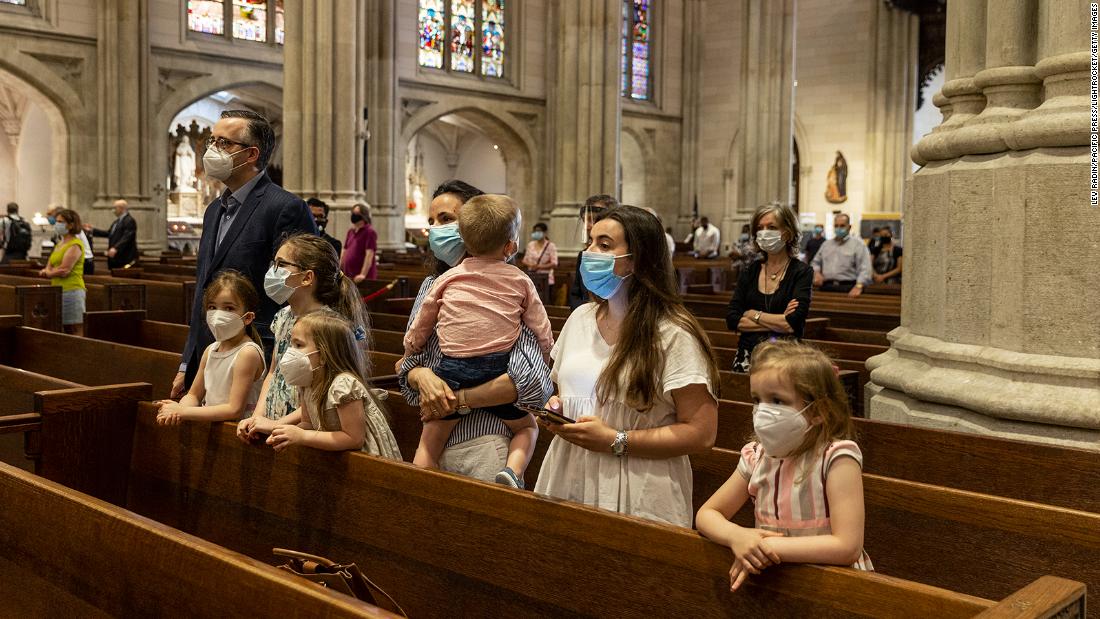 But that picture hides a broad consensus about what congregations should be and are doing during the coronavirus pandemic, according to a new survey by the Pew Research Center.
Just 12% of Americans said they attended a house of worship from mid-June to mid-July. That’s down from a Gallup poll last year that found 34% of Americans said they had attended a religious service in the past week.

More than half who regularly attend religious services say their congregation is open. Of those, most say social distancing and masks are required during services.

But a much lower percentage (37%) say their congregation has limited communal singing, despite warnings from the Centers for Disease Control that singing in close proximity can facilitate spread of the coronavirus. The CDC recommends that organizations “consider temporarily suspending singing, chanting, or shouting during events especially when participants are in close proximity to each other.”
Last March a Covid-19 outbreak swept through a choir in Mount Vernon, Washington, killing two members and sickening 53. In early July California temporarily banned singing and chanting in places of worship, citing the risks of church members being infected by “contaminated exhaled droplets.”

Pew surveyed 10,211 US adults online from July 13-19. Here are four other key findings from the survey.

The vast majority of American adults (80%) say churches should not be granted special exemptions but should be held to the same social distancing rules as other organizations and businesses.

Claire Gecewicz, one of the Pew researchers behind the study, said she was most struck by the broad agreement among Americans that churches should not get special exemptions from the state.

A number of churches have defied local orders against large gatherings and singing in congregations, suing their state’s governors for alleged abuses of religious freedom. The Supreme Court has twice sided with the states.

“Across all religions and all demographic groups, a majority say they should be required to follow the same rules,” said Gecewicz. “That’s very striking. There’s not usually that much unity on religious freedom issues.”

The Pew study also offers an illuminating glimpse at how houses of worship are operating.

Even among the most devout — those who attend religious services regularly — just 6% say their congregations are open as normal.

More than half of Americans (55%) who regularly attend worship say their congregation is open with modifications. Of those, more than 8 in 10 say social-distancing is required and two-thirds say attendance has been restricted. Similarly 63% say masks are required.

The coronavirus pandemic has been especially devastating to Black and Latino Americans, according to CDC reports. Both groups have been sick and died at disproportionate rates.

Health concerns, naturally, run higher among those groups, according to separate studies, and that extends to houses of worship.

About half of regular churchgoers have turned to online services

Most regular churchgoers (72%) have tuned in to watch religious services online. Half say they’ve online watched services online instead of attending in person.

That’s especially true of devout evangelicals, 80% of whom are watching services online.

Most Americans say they’re satisfied with the online services — and quite a few seem to be sanctuary hopping — sampling services from congregations other than their own.

What this will all mean for the future of religion in American is anybody’s guess. But at least now we have a clearer picture of the present.