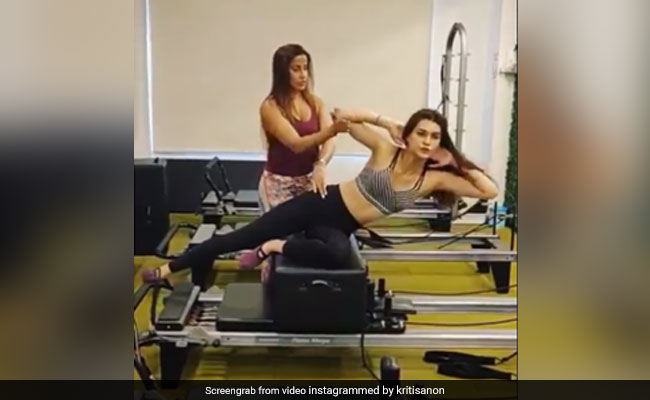 Kriti Sanon in a still from a video. (courtesy kritisanon)

Bollywood actress Kriti Sanon is a poet some days, on other occasions, she is a fitness enthusiast and a serious one at that. The reason we brought this up today is because the actress shared a post on her Instagram profile on Wednesday and she can be seen performing 5 different types of workout routines in it. From lifting weights, to stretching and exercising with a resistance band – the actress does it all with utmost ease. “Don’t need Monday for Motivation,” she captioned the post and added the hashtag #QuarantineWorkout to it. Billie Eilish’s song Bad Guy can be heard playing in the backdrop in the video. “Awesome” is how one fan described the post. Another fan added, “Inspiring.”

Without much ado, check out Kriti Sanon’s post here:

When Kriti Sanon is not busy with her fitness sessions, the actress puts her thoughts to paper. Adding the hashtag #PoeticSoul to her piece, Kriti wrote: “That moment, that gaze, when you look at him and see the reflection of your love pour into his eyes… Not a word spoken but what a conversation that is.”

Kriti Sanon was last seen in the Ashutosh Gowariker-directed 2020 period drama Panipat, in which she played the role of Parvati Bai, the second wife of Sadashiv Rao. Kriti had a busy year in 2019 with films like Arjun Patiala, Housefull 4 and Luka Chuppi hitting the screens. Her next release is Laxman Utekar’s Mimi, a remake of the National Award winning 2011 Marathi film Mala Aai Vhhaychy! The actress made her Bollywood debut with the 2014 film Heropanti, co-starring Tiger Shroff.