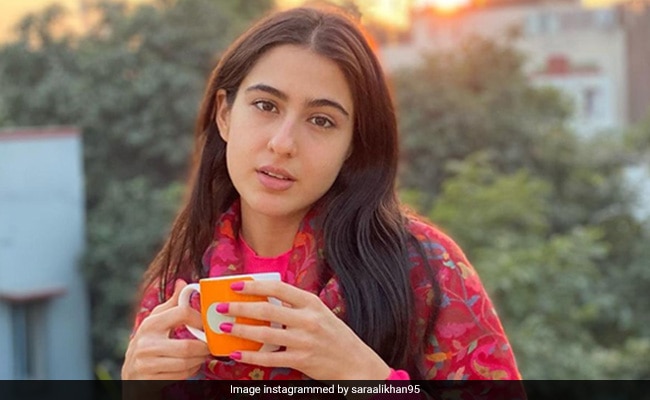 Sara Ali Khan has started filling up her winter diaries on Instagram. The actress, on Monday, posted a stunning photo of herself and we just love her caption. Sara Ali Khan is known for her poetic captions and her latest post is just another example of it. In the picture, Sara Ali Khan can be seen sipping her “winter chai” on what appears to be a terrace and she looks beautiful in the orange glow of the setting sun. Sharing the photo, the actress wrote: “Winter chai, setting sky.” Within minutes, her post was flooded with comments like “beautiful, you always look beautiful” and “cute, all-time favourite.”

Sara Ali Khan is currently busy promoting her upcoming film Coolie No 1. The actress will be seen alongside Varun Dhawan in the film, directed by his father David Dhawan. Ahead of the film’s release, Sara has been sharing pages from her promotional diaries. Recently, she posted pictures of herself and Varun Dhawan twinning in blue outfits and wrote: “Stages of posing. 1) Hold your pose and strike a smile. 2)Break into laughter since it’s been a while. 3) Hug and thank god that we are really the opposite of hostile. 4) Post about it, and make sure your caption rhymes since that’s your style. And after you’ve posted and tagged you can give Varun Dhawan a dial.”

And here are some other posts from Coolie No 1 promotions that Sara shared with quirky captions:

In terms of work, Sara Ali Khan, daughter of Saif Ali Khan and his first wife Amrita Singh, made her Bollywood debut with Kedarnath in 2018. She co-starred with late actor Sushant Singh Rajput in the film. She has since then appeared in two films – Simmba (alongside Ranveer Singh) and Love Aaj Kal (opposite Kartik Aaryan). She also has Atrangi Re lined-up. She will feature alongside Akshay Kumar and Dhanush in Atrangi Re.

The state of Meghan Markle’s relationship with the Firm revealed: report