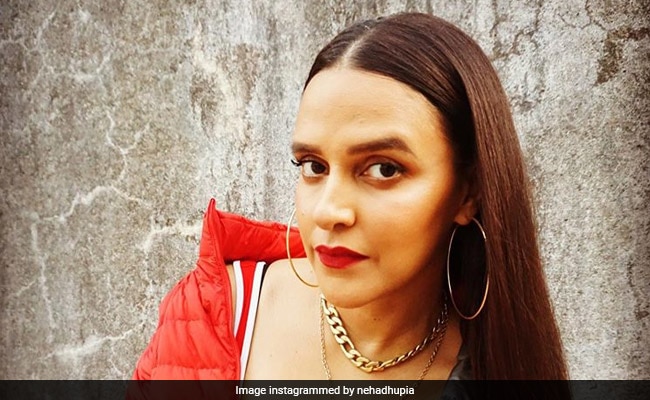 Actress Neha Dhupia, in a strongly-worded post on Saturday, slammed singer Suchitra Krishnamoorthi’s tweet about her getting talk shows because of “chamchagiri” (bootlicking) in Bollywood and called it “the most distasteful and disgraceful tweet” that she has ever read about herself. Suchitra Krishnamoorthi’s tweet about Neha Dhupia is the latest addition to the ongoing debate over nepotism, which escalated after the death of actor Sushant Singh Rajput. In her tweet, Suchitra Krishnamoorthi also made an unprofessional remark about Neha Dhupia’s friendship with filmmaker Karan Johar and wrote: “Peeps, it’s not #nepotisminbollywood one should aggravate against but chamchagiri (bootlicking). I mean how did Neha Dhupia suddenly get all these talk shows except that she is Karan Johar’s new bestie and Femina Miss India 2002!! – she’s no blood relative or star kid. Is she?”

Reacting to Suchitra Krishnamoorthi‘s tweet Neha Dhupia said she’s “proud to be self-made” and wrote: “Dear ma’am, this is possibly the most distasteful and disgraceful tweet I have read (trust me I have read a lot) to reduce a friendship of many years, that you know nothing about speaks volumes of you and the time you have at hand. I am proud to be self-made … a proud daughter, wife and mother… and I have the deepest regards for women who can acknowledge that. #strongwomensupportstrongwomen.”

Neha Dhupia, earlier this year, was trolled brutally by netizens for rebuking a contestant on Roadies Revolution after he bragged about slapping his girlfriend for alleged infidelity. Neha, however, stood firm on her decision and gave a befitting reply to the trolls in a lengthy social media post, an excerpt of which read: “Cheating is not something I stand for, and it is unfortunate that I have been misrepresented for the same. But what I do stand for is women’s safety. I stand by the fact that NO MATTER WHAT… physical abuse or assault is not acceptable.” Read here.

Peeps its not #nepotisminbollywood one shld aggravate against but chamchagiri. I mean how did #nehadhupia suddenly get all these talk shows except that she is #karanjohar s new bestie and #femina Missindia 2002!! – shes no blood relative or star kid is she

And here’s what Neha Dhupia tweeted:

The debate over favouritism in the Hindi film industry has been continuing on Twitter since the death of Sushant Singh Rajput, who allegedly died by suicide. Several members of the film fraternity have been accused of nepotism in Bollywood – Karan Johar’s name has repeatedly cropped up in the discussion. The filmmaker, who has given ‘star kids’ such as Alia Bhatt, Varun Dhawan, Janhvi Kapoor and Ananya Panday their big breaks in the film industry, was once even called “the flagbearer of nepotism” by actress Kangana Ranaut on his chat show Koffee With Karan.