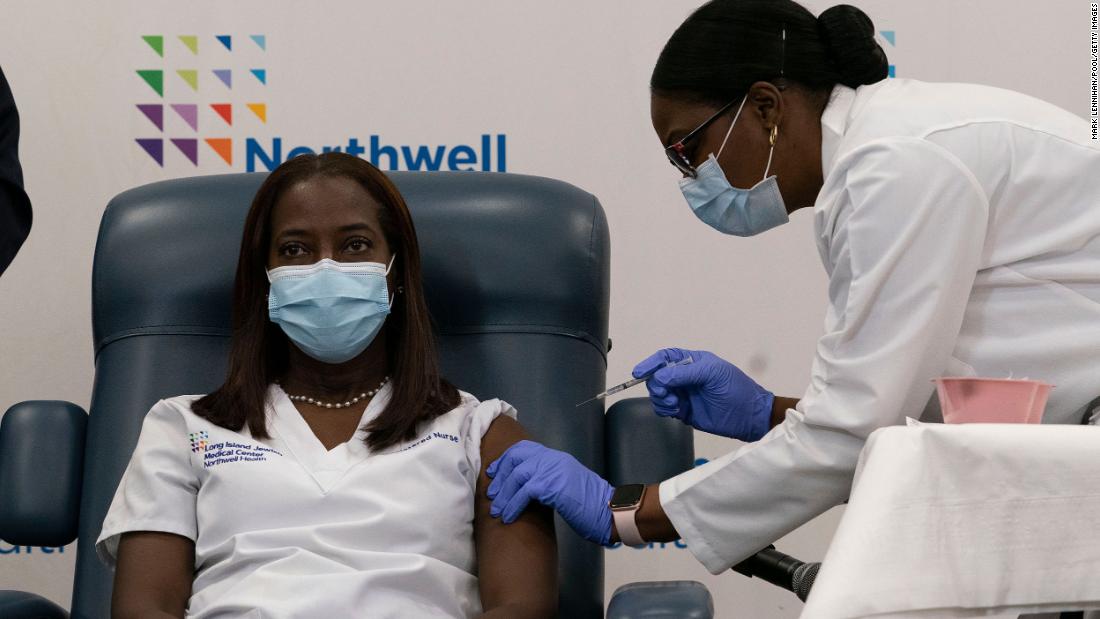 The findings come as the nation’s top health leaders urge Black people to trust the vaccine, by hosting live events where Black health professionals are among the first to receive and administer it.
The Kaiser study found that 35% of Black Americans would probably or definitely not get the vaccine if it was determined to be safe by scientists and widely available for free.

Of the Black Americans who are hesitant to get the vaccine, the majority, or 71%, said they were concerned about possible side effects, half were worried they would get Covid-19 from taking the vaccine and 48% said they have a general distrust in vaccines.

Other studies have noted that Black and Latino people cite distrust in the federal government and the nation’s history of racism in medical research as key reasons for their hesitancy.

Sandra Lindsay, a Black critical care nurse at Long Island Jewish Medical Center, was one of the first Americans to receive the vaccine on Monday. It was delivered by Dr. Michelle Chester, the corporate director of employee health services at Northwell Health, who is also Black.

Lindsay told CNN’s Anderson Cooper that she felt fine after taking the vaccine. Lindsay said the shot felt no different than the influenza vaccine she gets annually.

“I have no fear. I trust my profession is deeply rooted in science …” Lindsay said. “What I don’t trust is getting Covid-19 because I don’t know how it will affect me and the people around me that I could potentially transfer the virus to.”

Nearly 40% of reported Covid-19 cases have been Black and Latino people, according to the CDC.

Many people of color are concerned the vaccine developers haven’t take into account the needs of their ethnic group, the Kaiser study shows.

However, people of color overwhelmingly, or 85%, said they would trust vaccine information from their personal doctor or health care provider at least a fair amount, according to the study.

Black doctors have been at the forefront of efforts to build trust around the vaccine with Black people.

Dr. Yves Duroseau, chair of emergency medicine at Lenox Hill Hospital, was also among the first to receive the vaccine this week. Duroseau told CNN’s Poppy Harlow that he hoped to influence communities that have been disproportionately impacted by Covid-19.

“With the rollout of the vaccination there has been, quite frankly, message that we have to be ethical about this, we have to be fair, we have to protect the vulnerable,” Duroseau said.

“And we have to reach out to not just minorities but rural areas, we have to make sure that everyone is included.”

Ernest Grant, the president of the American Nurses Association, participated in a vaccine trial this fall to combat fears in the Black community with taking the vaccine.

“At some point there’s always that potential that it (Covid-19) could happen to you and if I know there is a cure that could potentially save me from that, I think I would go for the cure,” Grant told CNN last month.

Dr. Anthony Fauci recently acknowledged Dr. Kizzmekia Corbett, a Black woman and one of the lead scientists who helped develop the vaccine, with hopes that it would convince Black people to trust the process.

“So, the first thing you might want to say to my African American brothers and sisters is that the vaccine that you’re going to be taking was developed by an African American woman,” Fauci said at a National Urban League event earlier this month. “And that is just a fact.”