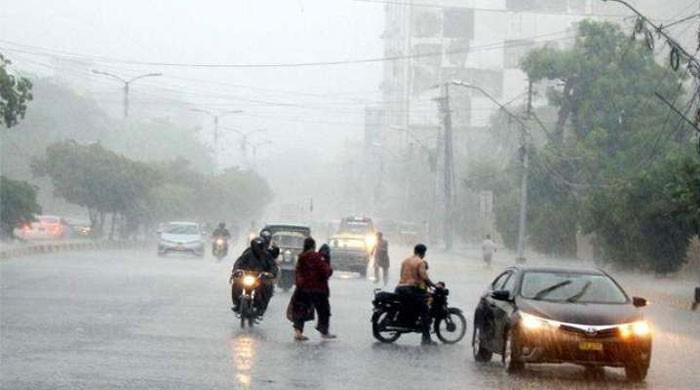 The NDMA has warned that urban flooding could occur in Karachi, Hyderabad and other cities by the expected rains.

“Road clearing machinery and necessary staff should be prepared for an emergency situation,” said the NDMA in its advisory. It also advised citizens not to leave their homes for any unnecessary things and stay away from electricity poles.

The NDMA also advised fishermen to not go deep into the sea as the waves will be high in Sindh and Makran coastal belt.

The Pakistan Meteorological Department has already warned that the weather in Karachi will be very hot and humid before a strong monsoon system resulting in heavy rains will hit Karachi in the evening or night.

“The temperature is expected to rise up to 39 to 41 degrees Celsius, with 70 to 80% humidity. This will be followed by a thunderstorm with rain and gusty winds,” said Karachi Met Director Abdul Qayyum Bhutto.

Rejecting the rumours circulating on social media claiming that the weather system that is expected to cause heavy rains in the province has been named, Bhutto said that only tropical cyclones formed in the Arabian Sea are labelled for identification and to help regional countries.

He clarified that land-based weather systems are never named by any of the meteorological departments around the world. “Some people’s use of such terms on social media for the upcoming weather system has not only confused the masses but also created confusion among the national authorities and international meteorologists.”

According to Bhutto, the merger of two monsoon systems — one present in south-east Sindh and the other originating from the Bay of Bengal — heavy to very heavy rains are expected in the entire southern province, including Karachi. “Both the weather systems are strengthening.”

He said that widespread thunderstorms with isolated heavy to very heavy rains are expected in Karachi, Hyderabad, Thatta, Badin, Tharparkar, Umerkot, Mirpurkhas, Sanghar, Tando Allahyar, Matiari, Tando Mohammad Khan, Jamshoro, Dadu and Shaheed Benazirabad from Thursday to Saturday. “We are expecting 100mm to 130mm of rain in Karachi during this period.”

Following the forecast of heavy rains, an emergency has been declared at every tertiary-care hospital in the province, while all the medical superintendents, executive directors, district health officers and other officials have been advised to remain highly vigilant.