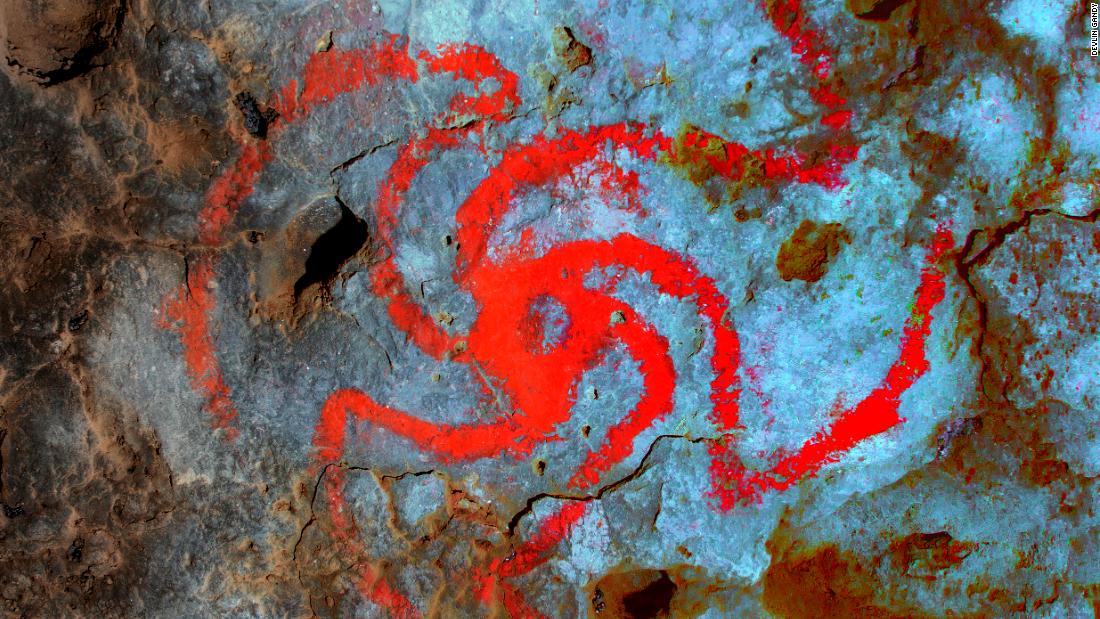 The cave is home to a striking image of a pinwheel thought to represent the distinctive shape of the sacred datura flower, or Datura wrightii. This perennial plant species, native to California, is known to have psychoactive properties. Quids — small packages of leaves and fibrous material from the plant — that were typically chewed were found stuck in crevices in the cave ceiling.

While it has long been thought that rock and cave art was made during trance states induced by hallucinogens, “unambiguous evidence of the consumption of hallucinogens has not been reported from any rock art site in the world,” the study said.

However, the findings called into question some long-held assumptions about rock art in the region, said David Robinson, lead author of the study that published Monday in the journal PNAS.

Some scholars believe that rock art was predominantly produced in caves visited and “owned” by individual shamans. The paintings, these researchers suggested, represented the visions that came to them during the drug-induced trances.

“The idea (is) that a male shaman goes off to a hidden space and takes his hallucinogen at his vision quest site and he reproduces his visions on the rock,” explained Robinson, a lecturer in archaeology at the School of Forensic and Applied Sciences at the University of Central Lancashire in the United Kingdom.

Robinson however, said that his new study, along with other recent research, suggests that while there are a few sites that might have been used for “vision quests,” the majority of rock art sites were places where people lived. The paintings, he said, were about communicating “the core belief systems” of the community that lived there.

The pinwheel also wasn’t the result of one artist’s vision; it was painted over and retouched several times, the study found. In fact, much of the art in the region shared common symbols or designs about things things that were important to the local culture.

“It’s a form of visual communication within indigenous society that is for everyone’s benefit. That’s the main thing this research is showing. It’s not about an individual’s cognitive experience.”

“If it were shamans, you’d expect a lot more variety and a lot less common compositional elements across the whole region,” explained Robinson.

The idea of the male shaman painting rock art, he said, had seeped into contemporary native Californian discourse.

“Female members of Native American tribes are hearing this from anthropologists but there’s no reason women couldn’t have been involved in rock art. So this sort of narrative has some negative impacts.”

So why might the people who lived in this cave have taken the hallucinogenic plant? The study didn’t give any hard answers.

But datura has been associated with adolescent group initiations in Native Californian culture, the study said, though most evidence points to the plant being brewed as a drink rather than chewed as the evidence in this particular cave revealed.