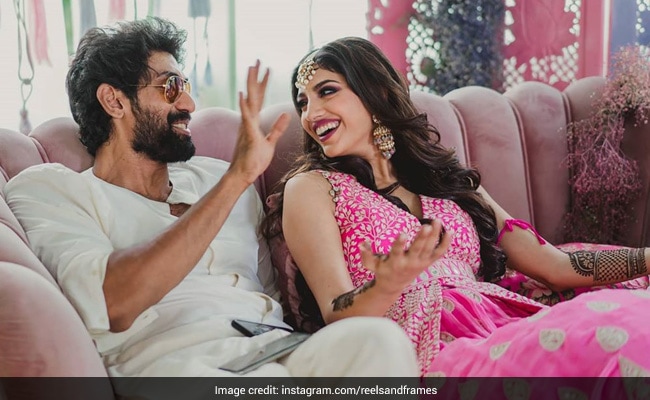 Rana Daggubati and Miheeka Bajaj had a whole lot of fun during their pre-wedding festivities and photos from the ceremonies are absolutely gorgeous! On Friday evening, Miheeka Bajaj stole the show at her mehendi ceremony in a gorgeous pink lehenga and complimenting her in white was the man of her dreams Rana Daggubati. Keeping social distancing rules in mind, Rana and Miheeka’s celebratory functions are restricted to a limited guest-list with only close friends and family being invited, and actress Samantha Ruth Prabhu was among them. Samantha is the wife of Naga Chaitanya, who is Rana Daggubati’s cousin – Naga Chaitanya is the son of Telugu superstar Nagarjuna and his first wife Lakshmi Daggubati. She is the sister of South superstar Venkatesh Daggubati and producer Suresh Babu Daggubati, Rana Daggubati’s father.

Photos from Miheeka Bajaj’s mehendi ceremony have been shared by Reels And Frames, who appear to be the official wedding photographers of the star wedding. Designer Kunal Rawal, whose sister Sasha is married to Miheeka’s businessman brother Samarth Bajaj, let us in into dreamy mehendi ceremony.

Rana Daggubati accessoried with a face-mask while posing for the cameras:

Rana and Miheeka also had a blast during their Haldi ceremony on Thursday:

Rana Daggubati and Miheeka Bajaj got engaged in a private ceremony in Hyderabad in May, attended by only a few family members. Earlier, Rana had introduced his then-fiancee with a “She said yes!” post:

Miheeka is an entrepreneur and runs the interior designing and event management firm Dew Drop Design Studio. She studied Interior Designing at Chelsea University. Rana Daggubati is best-known for portraying the character of Bhallaladeva in the Baahubali series of films.

The Royal family bears with ‘The Crown’ due to decade old tradition of ‘never complain’: report