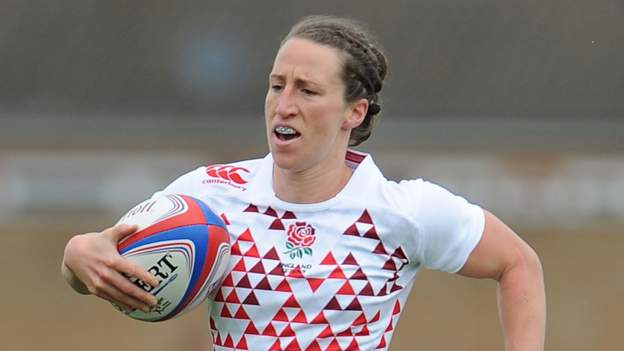 Brain injury charity Headway is calling for more research into whether women are more prone to concussion than men.

Merchant retired on medical advice aged 28 in 2014 after 11 confirmed concussions in 14 seasons and still suffers with symptoms.

“I have a lower cognitive capacity,” she told BBC Radio 5 Live.

“I can’t do a hundred things at once without getting a headache or getting flustered or without forgetting my words.”

Fellow England World Cup winner Steve Thompson and seven other players are preparing a negligence claim against the game’s authorities..

Merchant is not currently considering legal action, but wants more support for players once they are finished with the professional game.

“For retired players it’s a bit like, ‘Thanks for your time, thanks for putting your body on the line for however many years, goodbye,'” Merchant, now 35, continued.

“I really suffered because I retired on medical grounds at 28, before my time. I really struggled with a loss of identity so I would have appreciated more help mentally as well.”

‘I sat in a dark room crying’

A year after retirement Merchant was still struggling with strong symptoms and anxiety and was unable to get an MRI scan through her insurance company.

She turned to the Rugby Players’ Association, which quickly sorted a scan and consultation with a neurologist.

“It took me a year to reach out to the RPA, and it was because I was sat in a room in the dark and burst out crying and I was just like, I can’t do this any more,” Merchant explained.

Merchant was a professional rugby player on a full-time England contract in the build-up to the 2014 World Cup and was offered a sevens contract to work towards the 2016 Rio Olympics. But she decided to retire after one doctor told her: “We don’t know what the next knock will do to you.” A friend also asked her: “Will it all be worth it, if you can’t remember it?”

Are women more susceptible to concussion than men?

Whether women suffer from concussion more easily than men is yet to be proved, but some research indicates this could be the case.

“There is potentially a link there that women may be more susceptible to suffering from concussions and the effects of them,” he said. “What is less clear is the reason why.

“Different studies have indicated that a physiological difference in women’s necks along with links to women’s biology and the menstrual cycle could all play a role in making them susceptible to concussion.”

But Headway says the link could be because women may be better at reporting symptoms and episodes of concussion than men.

“If it is the case that women are better at reporting this, are more honest, less prone to taking chances on their health, then it’s up to males to step up and actually learn from this and improve their behaviours so they are taking fewer chances,” Griggs said.

The Rugby Football Union told the BBC: “The RFU takes player welfare incredibly seriously. As a result of our focus in welfare and specifically concussion, we have been able to develop our approach to concussion surveillance, concussion education, concussion management and concussion prevention across the whole game.

“The introduction of the Premier 15s three years ago and the 28 full-time England contracts has allowed us to improve concussion surveillance, education and management specifically within the women’s game.

“We will continue to work with World Rugby and external academic institutions and other sports to develop targeted research programmes across all areas of the game.”

Will lightning strike twice for Chorley and Wolves?