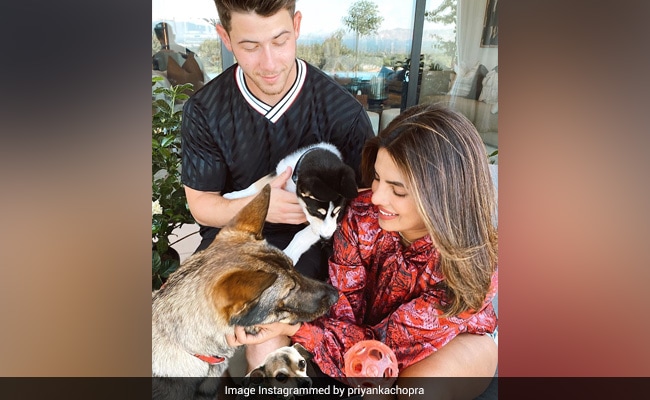 Have you met Panda – the latest addition to Priyanka Chopra and Nick Jonas’ family? If not, we are here to help. Priyanka Chopra recently shared a picture of herself along with husband Nick Jonas and their pets Gino, Diana, and Panda. The couple recently adopted a dog and named him Panda. The caption on Priyanka Chopra’s post read: “Our new family portrait! Welcome to the family, Panda! We adopted this little rescue (soon he won’t be so little) just a few weeks ago. We can’t be sure but he seems to be a Husky Australian Shepard mix…. And those eyes and the ears.” She signed off the post saying, “BTW Diana wasn’t around for our little photoshoot, but we couldn’t leave our #1 girl out, so we made it work.”

Priyanka Chopra married Nick Jonas in a Christian and a Hindu ceremony in Jodhpur’s Umaid Bhawan Palace on December 1 and 2 in 2018. The couple later hosted receptions in Delhi and Mumbai. The couple frequently share pictures with their pets Gino and Diana on their respective Instagram profiles. Take a look at some of the posts here, you can thank us later:

In terms of work, Priyanka Chopra will next be seen in Netflix’s adaptation of The White Tiger, co-starring Rajkummar Rao. She also has the superhero film We Can Be Heroes and a film with comedian Mindy Kaling. She has also signed Amazon’s web-series Citadel. The actress also announced the Sangeet Project with Amazon Prime. Priyanka’s last theatrical release was The Sky Is Pink with Farhan Akhtar and Zaira Wasim.

Has Nicole Poturalski, Brad Pitt’s romantic journey come to an end as she reunites with husband?