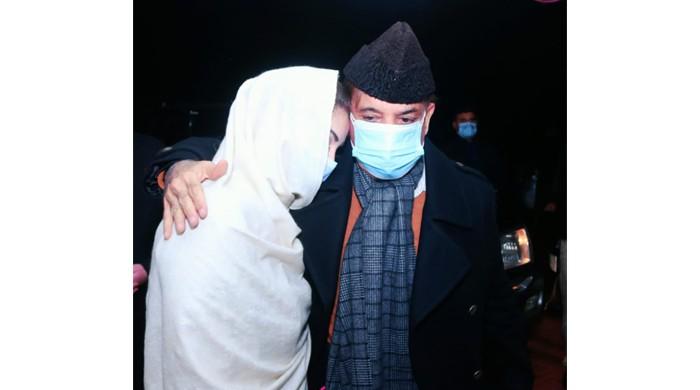 In an emotional tweet on Friday, PML-N vice-president Maryam Nawaz disclosed that she felt like meeting her father, Nawaz Sharif, when she embraced her uncle Shahbaz Sharif after he was released from prison on parole.

The PML-N president and his son, Hamza Shahbaz, were released on bail today after the Punjab cabinet green-lighted a five-day parole so that they can attend the funeral of Shahbaz’s mother, Begum Shamim Akhtar.

The former Punjab chief minister’s mother had passed away a few days ago in London where she was staying with her elder son, former prime minister Nawaz Sharif.

“I felt I met Abu,” Maryam wrote  on Twitter, attaching a picture in which she can be seen embracing her uncle.

Earlier in the day, former prime minister and PML-N chief Nawaz Sharif had offered the funeral prayers of his mother in London along with several family and party members.

The prayers were held in London Central Mosque — alternatively known as Regent’s Park Mosque — where the number of participants had to be limited to 30 under the United Kingdom’s coronavirus guidelines.

After the prayers, Begum Shamim’s body was taken to the London Heathrow Airport for repatriation to Pakistan.

Begum Shamim had passed away aged 89 on Sunday. She had developed a severe chest infection and was suffering from an advanced stage of Alzheimer’s disease.