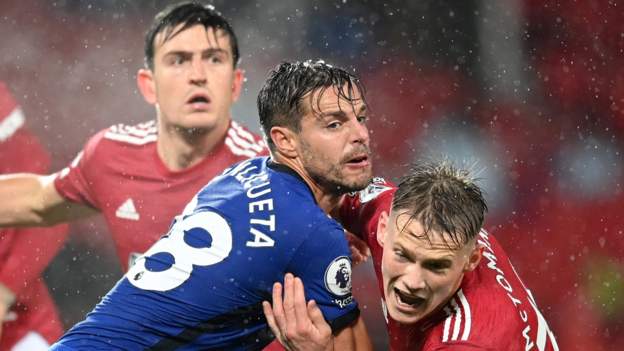 Manchester United and Chelsea ground out a drab goalless draw in the Old Trafford rain that will convince no-one either side will be challenging for the Premier League this season.

Chelsea will probably be happier with a point and might have had more if United skipper Harry Maguire had been punished for wrapping his arm around the throat of Cesar Azpilicueta as he defended a first-half corner.

Although they remain stuck in the bottom half of the table, United were at least able to avoid losing a third straight home league game at the start of the season for the first time since 1930.

In addition, they can also point to three good saves from Edouard Mendy, two to deny Marcus Rashford, including one in the final minute, and one where Bruno Fernandes was thwarted.

However, Chelsea’s biggest scare was Mendy passing the ball across his goal and out for a corner in the first half when trying to pass to Thiago Silva.

Neither Edinson Cavani, on his debut, nor Paul Pogba could change things in the home side’s favour after they were introduced as substitutes. Mason Greenwood was given the final eight minutes to make an impression – but did not.

Chelsea gain in defence but lose in attack

Successive clean sheets does provide Chelsea with the kind of platform they have been lacking so far this season.

The return of Thiago Silva to anchor a three-man defence provided solidity. Yet it also seemed to cost Chelsea their edge in attack.

Too often Timo Werner and Christian Pulisic were left trying to take United’s defence on alone and rarely did the visitors mount concerted pressure around the United box, even though they dominated possession for long periods.

England defender Reece James looked their most inventive attacking threat with his forceful bursts down the right flank. However, his final ball was poor and United keeper David de Gea did not have to make a meaningful save.

Sixth place may look presentable for Frank Lampard’s men at the moment but they could slide down the league over the weekend and evidently, a large summer outlay is yet to pay dividends.

It has been another amazing week for Marcus Rashford.

After getting the Government to overturn its own policy on providing free school meals to children forced to stay home during the spring lockdown, the England striker responded to a lacklustre response to his request for half-term meals by summoning support from everywhere apart from Downing Street.

Even Liverpool manager Jurgen Klopp publicly backed Rashford, which considering the antipathy between their respective clubs is some going.

What Rashford does on the pitch is also important, though, and this was a frustrating experience.

He was caught up in the general non-event of the first 25 minutes. On one United counter, he was screaming for a pass over the top from Juan Mata that he could chase beyond the Chelsea defence. Instead, the ball went sideways to Luke Shaw and was lost.

Mata did send Rashford through after Fernandes won possession inside the visitors’ half but Mendy denied him with a feet-first stop. By half-time, Rashford still looked in discomfort after he had gone down in pain after a tangle of legs with N’Golo Kante.

He recovered and after being moved to the left following the introduction of Cavani, remained a threat, with Azpilicueta blocking his low shot before Mendy kept out his final effort.

It was largely an evening of frustration, though, summed up as he smashed the ball away in irritation as the final whistle sounded.

Manchester United are next in action on Wednesday, 28 October, when they entertain RB Leipzig in the Champions League (20:00 GMT) and then entertain Arsenal in the Premier League on 1 November (16:30 GMT). Chelsea travel to Russia to play FK Krasnodar in the Champions League, also on Wednesday (17:55 GMT). They visit Burnley in the Premier League on 31 October (15:00 GMT).

Music for monkeys and penguins in public

Travelling at Christmas: What you need to know