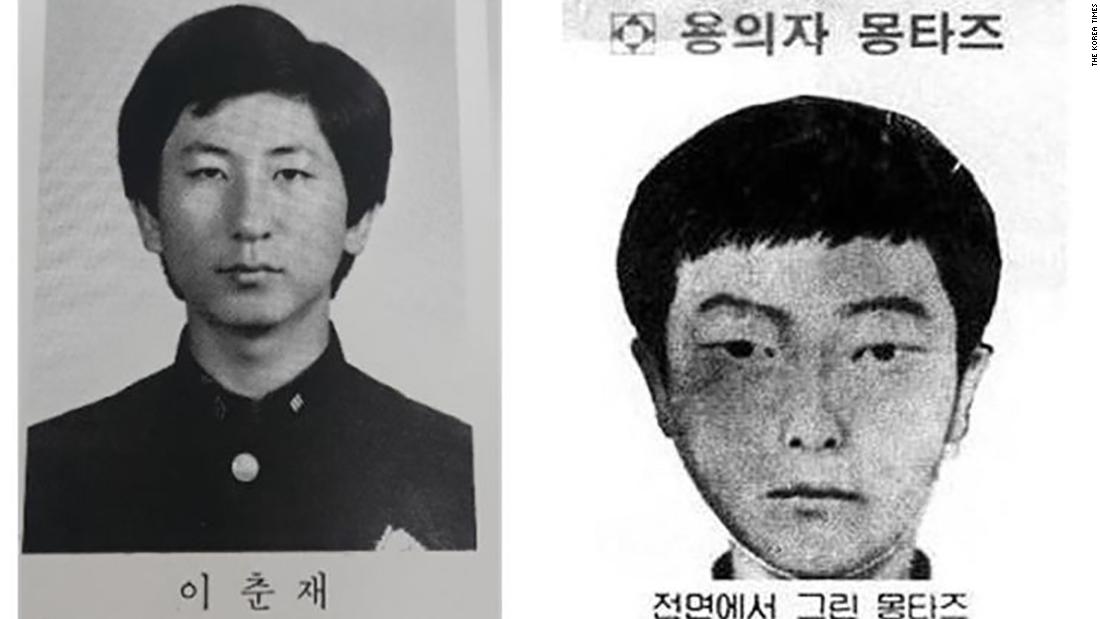 Lee Chun-jae confessed to the killings in front of Yoon, the only person ever convicted of any of the murders.

“I didn’t think the crimes would be buried forever,” 57-year-old Lee told a court in the South Korean city Suwon. He confessed to the murders last year to the police, but this is the first time he has publicly discussed the killings.

Yoon — whose full name is not being published due to a South Korean law that protects the privacy of suspects and criminals — was released in 2008, after spending 20 years in prison for the 1988 rape and murder of a 13-year-old girl.

That murder is one of 10 killings that took place between 1986 and 1991, which are known as the Hwaseong murders after the area in which they took place.

For decades, the nine other murders went unsolved, and the cases were revisited in “Memories of Murder,” a 2003 film by “Parasite” director Bong Joon Ho.

Then last year, police launched a probe after new DNA evidence connected Lee with at least some of the killings. Yoon, who had for years protested his innocence, was granted a retrial, at which his lawyers are attempting to overturn his conviction.

At Yoon’s retrial Monday, which is ongoing, Lee said that when he was questioned by police at the time of the killings, he had a watch of one of the victims on his person. But police questioned him for not having his ID card on him — and he was set free soon after.

“I still don’t understand (why I wasn’t a suspect),” he said. “Crimes happened around me and I didn’t try hard to hide things so I thought I would get caught easily. There were hundreds of police forces. I bumped into detectives all the time but they always asked me about people around me.”

Lee said he didn’t have a reason for killing the 13-year-old and showed no emotion as he described how he killed her. “It was an impulsive act,” he said in court.

“I heard from someone that a person with a disability was arrested but I didn’t know which one he was arrested for as I committed many (crimes).”

Lee apologized to the family members of his victims — and Yoon.

“I heard that many people had been investigated and wrongfully suffered. I’d like to apologize to all those people,” he said. “I came and testified and described the crimes in hopes for (the victims and their families) to find some comfort when the truth is revealed. I’ll live my life with repent.”

Lee has been in prison since 1994, where he is serving a life sentence for the rape and murder of his sister-in-law that year, according to Daejeon court officials and South Korea’s Justice Ministry.

Lee cannot be prosecuted for the Hwaseong cases as the statute of limitations on those has expired.

At the time of the murders, Hwaseong was a rural area home to about 226,000 people scattered among a number of villages.

Violent crime was unusual in the area. Police poured resources into finding the serial killer, including logging more than 2 million days on the case — a record for an investigation in South Korea, according to news agency Yonhap.

Multiple people including Yoon, who had a limp from childhood polio and hadn’t finished elementary school, accused police of using torture during the investigation.

In July, Gyeonggi Nambu Provicial Police Agency chief Bae Yong-ju admitted that during the initial investigation in 1989, police assaulted Yoon and coerced him into making a false confession. An official document noted that a witness was present during Yoon’s confession — but Bae said that was not the case.

“We bow down and apologize to all victims of the crimes of Lee Chun-jae, families of victims, and victims of police investigations, including Yoon,” Bae said Thursday, noting others had suffered from “police malpractice” during the initial Hwaseong investigation.

Bae also said authorities concluded Lee was responsible for all 10 killings that took place between 1986 and 1991 in Hwaseong.

Yoon said Monday that he needed time to digest what had happened in court. Yoon has previously said that he feels frustrated about all the years of injustice and wants to live the rest of his life as an innocent man.

“I want to clear my false accusation, and I want my honor back,” he said earlier this year.

Plotting the future: Trump kids even look to profit from their father’s fallen legacy