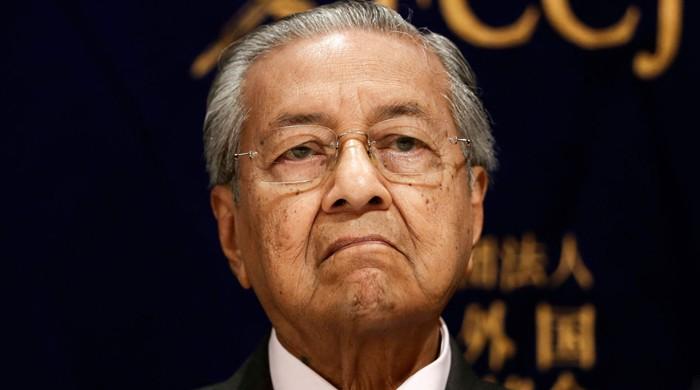 Former Malaysian prime minister Mahathir bin Mohamad said Saturday he would highlight Indian atrocities and injustices in occupied Kashmir now “without restraint” as his country would not have to pay the price as he was not in an official position anymore.

In a series of tweets following an event held in Kuala Lumpur in support of Kashmir, Mohamad said he had chosen to speak out last year despite being aware of the potential backlash.

“Standing up for humanity I had chosen to speak out despite being aware of the potential backlash. To my mind, keeping quiet is not an option when all the tell-tale signs were pointing towards another situation whereby a big and powerful country imposed its will with impunity on a small and defenceless nation,” he said.

He added, “What transpired since my contentious speech at the UN General Assembly in September last year only served to prove that what I had said was mild and to a certain degree, restrained.”

The two-time former prime minister added that he will offer no apology as to what he said.

“I offer no apology for what I had said though I am sorry that it had affected our palm oil export to India. I don’t know if that is a high price to pay for speaking out against such injustices,” Mohamad remarked.

In September 2019, Mohamad, then prime minister of Malaysia, had raised the Kashmir issue while speaking at the UN General Assembly, drawing a strong reaction from the Indian Ministry of External Affairs (MEA), which said New Delhi “completely rejects the references made in respect of Jammu and Kashmir, which is an integral and inalienable part of India.”

He added that since he was no longer the prime minister, he could now speak about the Kashmir issue without restrain and threats of boycott.

Acknowledging the veteran statesman, Prime Minister Imran Khan said he was thankful to Mohamad for speaking in support of Kashmiris and against Indian repression in the occupied valley.

“I want to thank Dr Mahathir Bin Mohamad for speaking in support of Kashmiris and against Indian repression in IIOJK – this time at a function on Aug 8 to mark a year of the illegal Indian actions in IIOJK,” he tweeted.

PM Imran, in his speech at the UNGA, had heavily criticised Indian PM Narendra Modi and his party’s ultra-nationalist hardline style of governance.

He had also said that India ended the special status of occupied Kashmir by flouting 11 resolutions of the UN Security Council.

“There is no other narrative left for India,” PM Imran had said, adding that there is another chance of a Pulwama-like incident to blame and ‘bomb’ Pakistan.

“India must lift this inhuman curfew,” the prime minister had said, adding that if the lockdown was not lifted, the eight million people under lockdown in the valley were likely to get radicalised.