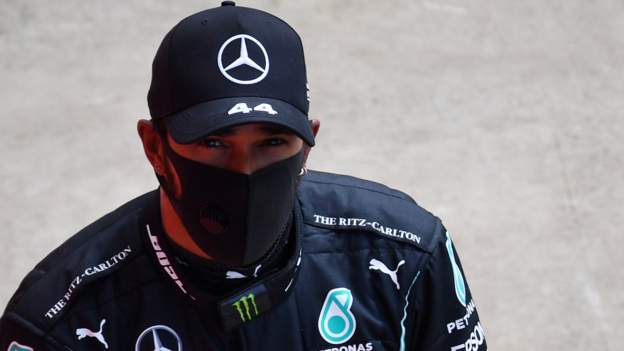 The pain of losing oozed out of every part of Lewis Hamilton’s being after qualifying at the 70th Anniversary Grand Prix.

Hamilton had been beaten to pole position by his Mercedes team-mate Valtteri Bottas by just 0.063 seconds, the first time the Finn had headed the Briton on the grid since the first race of the season at the start of last month.

Afterwards, Hamilton’s answers in the post-qualifying news conference were short and to the point, as they so often are in these circumstances.

“Valtteri did a fantastic job today,” Hamilton said. “He was just a bit too quick for me. The first lap was fairly decent and the last lap wasn’t spectacular. Ultimately, he did a better job.”

This is standard Hamilton fare when he is second. It eats him up. Losing is something he simply cannot accept.

It is at times like this that the outside world gets a sense of the remarkable determination and drive that, allied with his talent, has pushed Hamilton forward to the point where he is within sight this season of becoming the most successful driver in the history of the sport.

Hamilton is on 87 wins, just four shy of Michael Schumacher’s all-time record, which until recently had felt impregnable. But if he is to inch closer in Sunday’s race, the second at Silverstone within a week, he will have to pass Bottas first.

This is never an easy task in a team that tries to operate as fairly as possible.

Unless he can pass Bottas on track, a difficult ask in cars of similar pace, Hamilton’s options are the start – and it is hard to see him backing off in the way Bottas did last weekend when the Finn got a better start and was alongside Hamilton into the first corner – or to try something on strategy.

But Mercedes has so far been reluctant with Hamilton and Bottas to allow them to try the sort of off-set strategy – taking different tyres at different times – that led to classic fights between Hamilton and Bottas’ predecessor Nico Rosberg such as that at Bahrain in 2014. That competition created a toxic atmosphere in the team, which Mercedes would rather not repeat.

One thing to be certain of, though, is that Hamilton will try to find a way, just as he did when he qualified second at last year’s British Grand Prix.

“We still have a long race,” he said, “and I will do everything I can to try and beat this guy.”

Bottas, meanwhile, knows this is his opportunity to cut back into the 30-point lead Hamilton opened out as a result of the dramatic end to last week’s race, when both Mercedes drivers suffered late punctures.

“Of course mentally when you are starting from pole you can only aim to win,” Bottas said. “The pace is there. First job is to get off the line, and the mentality is try to win it. That’s it.”

Verstappen in the wild

One minor surprise in qualifying was that Red Bull’s Max Verstappen was beaten to his customary third place behind the Mercedes by Racing Point’s Nico Hulkenberg.

In the race Verstappen could well provide the biggest interest, outside the battle for the win between the Mercedes drivers, not least for his decision to start on the hardest tyre.

This call was informed by a move F1 has made in an attempt to spice up the action for this second consecutive race at Silverstone. Pirelli was asked to bring a tyre selection for this race one step softer than was supplied for the British Grand Prix last weekend.

That means that last weekend’s ‘hard’ tyre – the favoured race tyre for everyone – is not available. This week’s hard is last weekend’s medium, and this week’s ‘medium’ last week’s soft, which everyone tried to avoid for the race.

On these softer tyres, everyone is expected to have to make two pit stops, rather than the one of last week. Could this bring Verstappen into play in the race? He certainly wasn’t going to predict he could challenge the Mercedes.

“I felt strongly for that tyre,” Verstappen said, “because we are already running softer compounds so we can’t use the hard like last week. So I wanted to go for the hardest option we had.

“The soft was falling apart so was not an option. The medium was last week’s soft and that was also not an amazing tyre.

“It will depend on a few things – how my first lap is going to be and if there is a safety car. It felt like a nice tyre so that’s why I am going to give it a go.”

Since the start of the season, it has been obvious Racing Point were challenging Red Bull for the second quickest car, but things have not come together for the team at any race up to now.

But on Saturday Nico Hulkenberg underlined what the car that has been dubbed the ‘pink Mercedes’ in F1’s “copying” row is capable of with a superb third on the grid.

The German, out of F1 since the end of last season, is subbing for the second weekend in succession for Mexican Sergio Perez, who has coronavirus. And Hulkenberg has been through the mill a bit.

His return last weekend could not have been more last-minute. And after he failed to make even the start of the race because of a mechanical problem, Hulkenberg has had another turbulent week as the team tried in vain to get Perez back in the car.

Hulkenberg has been working with Racing Point all week, preparing for the race, but it was only when Perez failed a Covid-19 test on Thursday evening that he knew he would be back in the car again this weekend.

Meanwhile, the team management were under pressure on two fronts.

Many were not impressed that they were pushing so hard for Perez when, from a PR stand-point, given the efforts F1 has made to get the season underway amid the pandemic, they might have been better advised just to commit to Hulkenberg for the two races.

At the same time, they were occupied with the fall-out from Renault’s successful protest against their car, after the publication of the stewards’ ruling that they had illegally copied Mercedes’ rear brake ducts.

On Saturday, Hulkenberg was a vision of calm in the storm.

“I’m just going with the flow,” he said. “We couldn’t expect too much last week. The high coming back Thursday, Friday and then Sunday the big low and now coming back, it has been a pretty wild week in a positive way.

“Physically, it has been tough. These cars are brutally fast in the change of direction and no gym in the world can prepare you for that.”

Verstappen said: “It clearly shows the car is very strong but also Nico did an amazing job in qualifying.

“They did a very good job over the winter but I really hope this will help Nico for his seat for next year because he definitely deserves to be in F1. There are a few drivers who aren’t as good as him.”

Hulkenberg is best known for holding an unenviable F1 record – that of the most races without a podium finish. And it is one he would really rather relinquish.

“I knew that would come up now,” he said, after qualifying, when someone asked whether he could finally get the monkey off his back.

“To be honest, it’s very challenging and difficult circumstances but I know I have a fast car beneath me. So it’s just trying to make sure to do everything right.

“Obviously it’s starting lap one. It’s going to be also new for me but I think I’ll just try to get it right with all the experience that I have and then we’ll race. I’m a couple of races behind the other guys but I still remember what it feels like.

“Just try not to think too much, keep my head down and have a good race.”

Racing Point team principal Otmar Szafnauer said after qualifying that they were hopeful Perez would be back for next weekend’s Spanish Grand Prix. So it could be Hulkenberg’s last chance.

In the past, when he’s been in a position to break his duck, he has dropped the ball. And the last time that happened, in Germany last year, was the moment that convinced Renault team boss Cyril Abiteboul that he should let him go.

Can Hulkenberg finally correct the record, while putting himself firmly back on the agenda for a permanent drive next year?