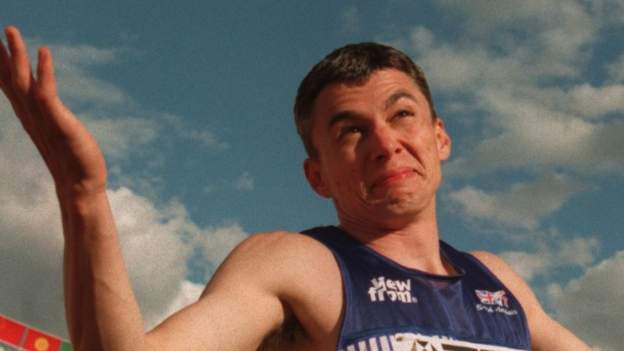 Jonathan Edwards hadn’t yet touched the sand, but he already knew.

“There was a moment during my step phase when I just had to wait to put my foot down and take the next landing – in that instant I knew it was better,” he tells BBC Sport.

That millisecond of certainty has now stretched into a quarter of a century of supremacy.

The rest of mankind is still trying to catch up.

“I look back on it now and it is almost other worldly. It is almost like it happened to someone else,” he adds.

Edwards’ world record has stood for longer than the legendary long jump world record – set by Bob Beamon at the 1968 Olympics and eventually overhauled by Mike Powell in 1991.

But while Beamon’s came out of thin air – achieved in high altitude Mexico City and with little warning in his previous form – Edwards had arrived in Sweden expecting something special.

Six weeks before the 1995 World Championships, he had shocked the world in Lille.

To a backing of gasps from crowd and commentators alike, he had flown out to 18.43m – nearly half a metre in excess of Willie Banks’ world record of 17.97m.

That extraordinary number could not pass into the record books, invalidated by a 2.4 metres per second tailwind, marginally over the limit.

But it moved Edwards, whose personal best at the start of the season was just 17.44m, into a different league.

“I went from being a 17:50 jumper to 18:50 jumper in one afternoon. I recall coming back to sit among my competitors and they were looking at me in disbelief,” he remembers.

By the time he arrived in Gothenburg, Edwards had claimed Banks’ world record with an improvement of 1cm to 17.98m. The markers he was measuring himself by were no longer mortal though.

He achieved his first aim with his first jump, leaping out beyond the end of the pit-side measuring board to 18.16m.

With world gold effectively sealed, his own world record improved and the competition just minutes old, Edwards was free to have some fun.

“But this time I didn’t.

“I was in brilliant shape at a World Championships in perfect conditions and a crowd right behind me. It felt like a once-in-a-lifetime opportunity and, when I look back now, I never had another day like that, athletically.

“If you see the look on my face before I take the second jump, there is a little smile, me saying to myself: ‘Let’s see what you can do here.'”

There is another telling look on his face as he picked himself out of the pit at the other end of the runway. Arms raised aloft, Edwards took a look at the dent in the sand below and almost in disbelief shook his head.

“When I landed in the pit, I knew it was another world record. It was as simple as that,” he says.

The ease with which Edwards had pushed back the event’s boundaries thrust triple jump to the fore.

When the annual sporting awards were handed out he was named World Athlete of the Year, despite Ethiopian distance great Haile Gebrselassie’s stellar year, and BBC Sports Personality of the Year, ahead of newly crowned heavyweight world champion Frank Bruno.

The best athlete in the world, the best sportsperson in the country, but not top dog in his hometown.

“The only one I didn’t get was the one voted for by Evening Chronicle, who chose Les Ferdinand as Newcastle’s sportsperson of the year,” laughs Edwards, who lives in Gosforth.

“It was the glory days of Kevin Keegan’s time in charge and everything is second to football here.”

For the rest of his career, like the Magpies, Edwards was forever chasing those heady days.

He was stronger and faster in subsequent seasons, but couldn’t piece together the technique to translate it into similar distances.

The current generation of jumpers have come closest.

Reigning world and Olympic champion Christian Taylor’s personal best is 18:21m. Fellow American Will Claye registered a 18.14m jump last year. Portugal’s Pedro Pablo Pichardo is fifth on the all-time list and the youngest of the trio at 27 years old.

“Who knows?” says Edwards when asked if his record is under serious threat.

“The three of them are good, and perhaps the competition they provide each other could push them on.

“But is nice they have given me 25 years! It is a nice milestone. I think I could let the record go much more graciously now.”