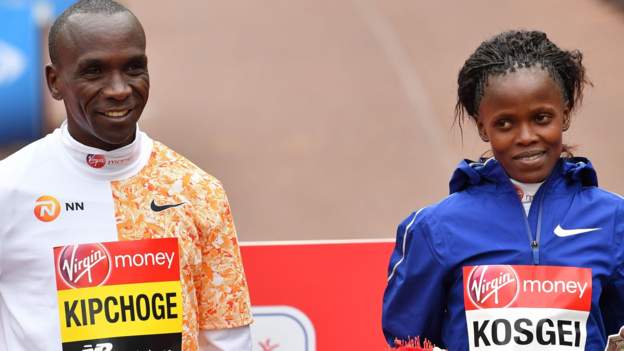 The 2020 London Marathon will involve only elite athletes, with 45,000 ‘mass-event’ runners unable to take part because of coronavirus concerns.

The much-anticipated contest between Kenya’s Eliud Kipchoge and Ethiopian Kenenisa Bekele will take place on a bio-secure closed course.

Reduced fields of 30-40 athletes will also compete for the elite women’s and wheelchair titles on 4 October.

The 2021 race, meanwhile, will be on 3 October rather than a date in April.

That calendar shift from the traditional date is designed to maximise the chances of all runners being able to take part in next year’s race.

A plan to include the mass-participation event in the 2020 race, deploying high-tech tracking technology to monitor runners’ proximity to each other, had been considered.

However, event director Hugh Brasher said that plan had been made impossible by the logistical challenges of managing spectators and emergency service access across London, especially given the recent cancellation of spectator trials at other sporting events.

Instead, it will only be the elite athletes that tackle a spectator-free course – following a different route to the usual one used for the London Marathon.

That route will consist of laps of roughly 1.5 miles, taking in The Mall, Horse Guards Parade, Birdcage Walk and the spur road running adjacent to front of Buckingham Palace.

As well as the showdown between four-time winner Kipchoge and Bekele, whose personal best is two seconds slower than Kipchoge’s world record of two hours one minute 39 seconds, British Paralympic great David Weir will be aiming for a record ninth win in the wheelchair race.

Athletes’ times in the race will be eligible for Olympic qualification for the postponed Tokyo Games in 2021.

While this year’s Tokyo marathon took place in a similar form in March, with only elite runners taking part and spectators restricted in number, other major marathons have been cancelled.

The Berlin and New York races, which were scheduled be held on 27 September and 1 November respectively, are among those that will not take place in 2020.

Runners with a place in the 2020 race, but not in the elite fields, will be able to compete virtually from any location around the world.

They are invited to run or walk 26.2 miles, taking breaks if required, over the course of 24 hours on 4 October, logging their progress on the event app.

Brasher said: “We believe that Sunday 4 October will be a London Marathon like no other, taking the spirit of the world’s greatest marathon to every corner of the globe, with runners raising vital funds for the charities that have been so severely affected by the economic effects of the pandemic.”