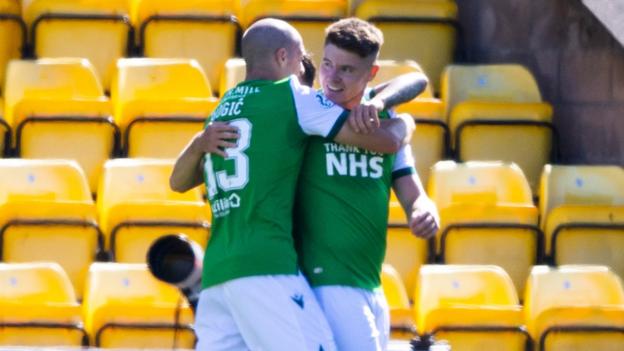 Kevin Nisbet secured an emphatic hat-trick as Hibernian blew away Livingston in the Scottish Premiership.

Striker Lyndon Dykes gave the hosts hope as he scored from the spot when Ryan Porteous was penalised for a push.

However, despite the sticky plastic pitch, Nisbet added Hibs’ fourth from the spot late on.

Nisbet joined Hibs last month from Dunfermline where he had scored 23 goals in 32 appearances.

In West Lothian, he oozed confidence, alert to the chances being created by Daryl Horgan on the left wing.

Livi are not accustomed to losing games at home but they were 3-0 down at half-time as Hibs looked far the sharper.

Scott Pittman tested Ofir Marciano with a low shot at the start of the second half to remind Hibs that a goal could change the nature of the game.

Martin Boyle ought to have made it 4-0 but scuffed his shot wide when he had time to pick his spot.

That lapse was made all the more galling when referee Euan Anderson awarded Livi a soft penalty kick on the hour mark for a push by Porteous on Matej Poplatnik. Dykes slammed his shot down the middle.

Hibs were rewarded for their waves of attack when, in the dying minutes, substitute Melker Hallberg won a penalty when he was barged off the ball by Marvin Bartley. Nisbet tucked it into the corner of the net to make sure he took the match ball home.