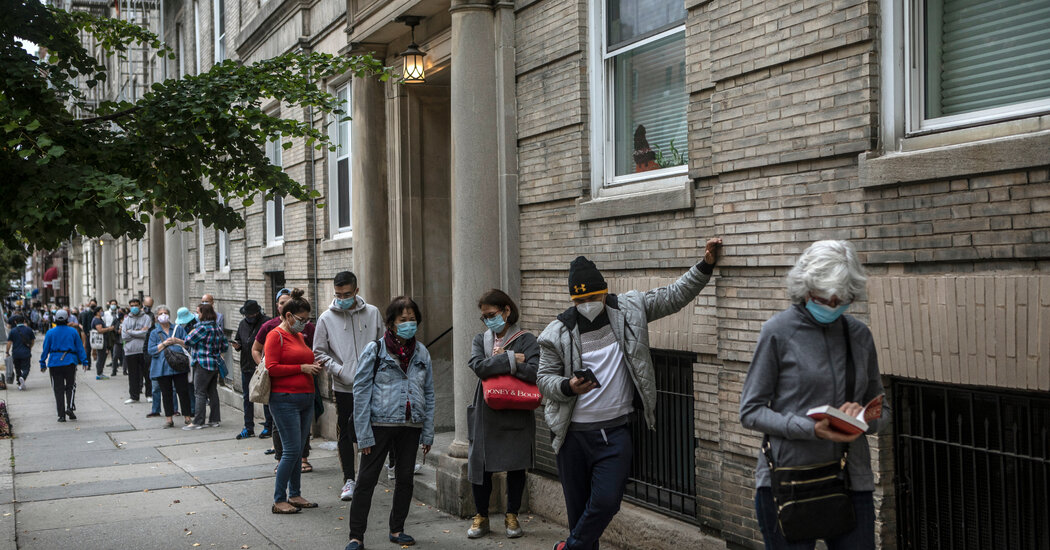 More than a dozen police officers were stationed outside and inside Madison Square Garden, and the Police Department announced earlier in the week that at least one police officer would be posted at each of the city’s 88 early polling sites.

The police were not aware of any specific threats directed at polling sites, but the department was devoting more resources to security than in past elections because of the contentious climate surrounding the presidential election, Chief Terence A. Monahan said.

On Election Day, there will be 1,201 polling sites open, and officers will be at all of them, Chief Monahan said.

“The public should have no fear, and should come out and vote,” he added.

Many times throughout the city, the mood among voters was as celebratory as it was serious, despite four- and five-hour waits.

A marching band performed in front of Barclays, and at Madison Square Garden, the actor Timothée Chalamet emerged from the polling site to cheers. He shouted back, “Everybody go vote! Go vote! Don’t get out of line! This election matters!”

Standing outside Barclays in the morning, Barbara Ali, 75, said she had contemplated absentee voting because of the coronavirus. She showed up to vote at 6:50 a.m. at Barclays Center. She called 311, the city’s information line, because she thought the polls opened at 7 a.m. They did not open for another three hours, but she decided to wait.

“Sliding it into the computer is the way I wanted to go,” Ms. Ali said.

In the Bronx, Bryan Washington, 60, showed up early to vote at The Andrew Freedman Home where the line stretched down Grand Concourse and around the corner. Many people wore face masks, and some of them even had on gloves. They tried to spread out at least six feet apart, but it was difficult to maintain social distancing in the more narrow parts of the street.

Mr. Washington said the reward of casting his vote early outweighed the risk of contagion. “I am one of the ones that truly believes this is one of the most important elections we ever had,” he said. “I truly believe this is an election for the soul of the country.”