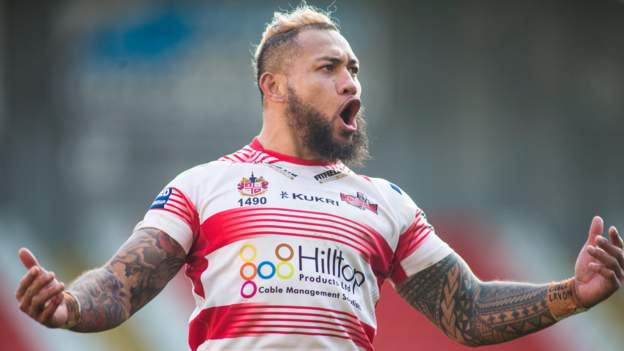 Leigh Centurions have been awarded the 12th place to play in Super League for the 2021 season.

Their last season in Super League in 2017 ended with defeat in the Million Pound Game by Catalans Dragons.

“I would like to dedicate this fantastic success to our loyal sponsors and season ticket holders who showed outstanding loyalty to the club by returning their refunds of their purchases as donations to the playing budget,” said owner Derek Beaumont.

“This enabled us to have already put in place a fantastic squad prior to the announcement of the opportunity to apply for the 12th place in Super League and I believe played a significant part in the decision process.”

An independent panel, led by Lord Jonathan Caine and compromising of three members from the Rugby Football League governing body and three from the Super League, made the decision.

“I was determined from the outset that this process should be robust and conducted to the highest standards of professionalism, integrity and on the basis of ‘rigorous impartiality’ between each of the applicants,” said Lord Caine.

“I am more than satisfied that this was the case.

“Each application was judged strictly but fairly against the agreed criteria that were circulated to clubs and published in November.

“All of the applications were of high quality and I would like to pay tribute to the clubs for the energy and effort they have put into this exercise in what was of necessity a very short time period.”

Leigh is a rugby league hotbed – sat in the borough of Wigan, with whom they share a sporting rivalry – and has a rich history within the game.

Their Challenge Cup success in 1971 in beating Leeds under the player-coach tutelage of Alex Murphy, the second of two cup wins, is the most famous moment but they also won the rugby league championship on two occasions.

They have also graced the top tier in the summer, in 2005 and then again 12 years later, and after the disappointment of relegation can now plan again for the elite level.

Analysis – ‘The stadium and fanbase swung the decision’

The quality of their stadium – it will be one of the venues for the World Cup next year – and a hardcore base of passionate fans will have helped swing this decision Leigh’s way.

They also have an owner in Derek Beaumont who has shown himself willing and able to invest in the club and playing staff.

Their most recent appearance in the Super League was back in 2017, when they lasted just a year in the top flight. Super League club owners, particularly those in the North West, will be fairly satisfied with this result as Leigh will likely bring a healthy following to each of their fixtures.

But it will disappoint those who wanted the game to be bolder and go down the expansion path. Leigh join Wigan, St Helens, Warrington and Salford in a rather constrained catchment area just off the East Lancs Road.

Like any of the other candidates to be the 12th club in Super League next year, they now face a huge battle to stay in the top flight. They’ll be immediate favourites for relegation at the end of 2021.

The Centurions have assembled a squad that would no doubt compete for promotion in the Championship, but now they need to strengthen that squad if they are to mount a realistic battle for survival.

That’s easier said than done. The majority of top-quality players are already tied up at other Super League clubs, who have known since the early summer that they will be in Super League next year.

Their spending limits will also be restricted, with only £1m of central funding made available to them, whereas the other Super League clubs will all take £1.5m from that central pot.

It’s a politically important time to be at the top table. We’ll know soon how much money the game will receive from a renewed TV contract, and it’s expected to be much less than the current £40m a year.

There are also ongoing efforts to bring a private equity investor into the game, and who knows what level of investment they might bring to the Super League or indeed what level of control and return they would expect for that investment.

Being part of the Super League club, for the next 12 months at least, means that Leigh can now have a role in deciding the path the game should take from 2022 and beyond.