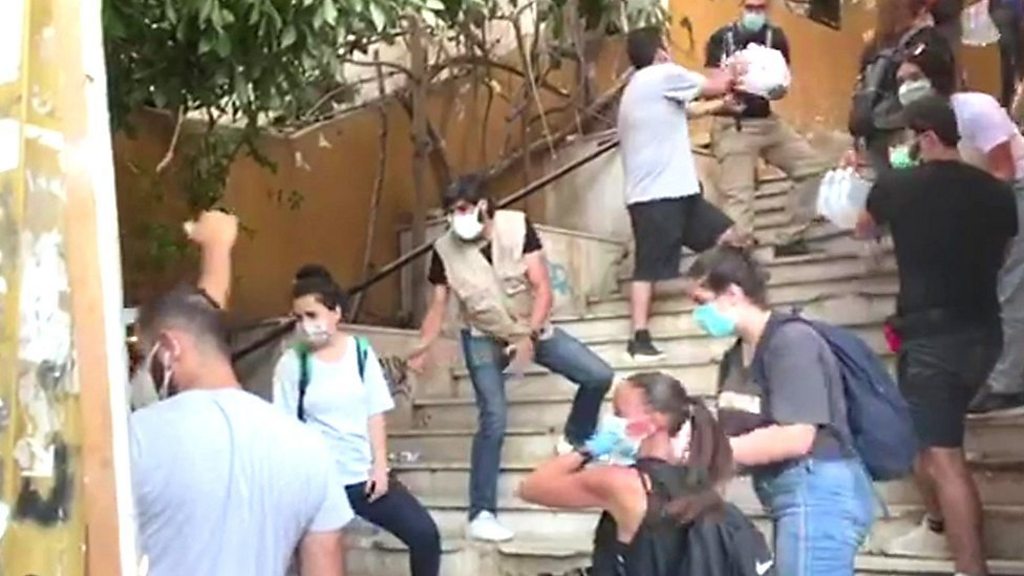 He also called for an international investigation into the blast.

Many Lebanese say government corruption, neglect and mismanagement led to the explosion.

It killed at least 137 people and injured about 5,000 others, while dozens are still missing. A two-week state of emergency has begun.

Lebanese President Michel Aoun says it was caused by 2,750 tonnes of ammonium nitrate stored unsafely in a warehouse.

On Wednesday, the government announced that a number of port officials were placed under house arrest pending an investigation into the explosion.

What did Macron say?

Speaking during a visit to Beirut, he described the explosion as a “metaphor for Lebanon’s current crisis” and said a “new political order” was needed. Funding was available for the country but its leaders had to implement reforms first, he said.

He also called for an international investigation into the explosion “to prevent things from remaining hidden and doubt from creeping in”, he said.

An aid conference for Lebanon would be announced in the coming days, he said. France would organise aid along with the European Union and the World Bank and would make sure it was sent directly to relief organisations working on the ground.

Earlier in the day Mr Macron was mobbed as he walked around the blast-hit city, with residents imploring him to help and denouncing their leaders.

“Help us, you are our only hope,” one resident called out. “Please don’t give money to our corrupt government,” said another, before adding: “We can’t take this any more.”

France – the former colonial power in Lebanon – has sent three planes carrying rescuers and medical kit to Lebanon, with a fourth arriving later and a French navy helicopter carrier carrying French investigators and further supplies due to arrive next week.

The country’s Supreme Defence Council has insisted that those found responsible for the blast would face the “maximum punishment”. Rights groups have also called for an independent inquiry, saying Lebanon’s judiciary could not conduct a transparent inquiry on its own.

Meanwhile, Amnesty International and Human Rights Watch (HRW) have called for an independent investigation into the blast. In a statement, HRW said it had “serious concerns about the ability of the Lebanese judiciary to conduct a credible and transparent investigation on its own”.

A city of sirens, empty buildings and empty streets

This port was Lebanon’s lifeline to the whole world. Something like 80% of the county’s grain came through here. I can see the grain silos, which were built way back when, and they’re teetering really. They no longer look like they’re going to survive. Just beyond there I can see a ship listing heavily. I’ve lived in Beirut for five years and it’s almost unrecognisable – it’s a city of sirens, of empty buildings, of empty streets.

As I look at the neighbourhood of Gemmayze just behind the port, I don’t think I can see a single pane of glass left. Entire roofs have gone – I can see friends’ apartments which are just open to the sky now. All of this area, which was really heavily populated, has been abandoned. No-one is coming back here anytime soon.

What’s really noticeable as you walk the streets here is that every second person seems to have a broom in their hand. There are clear-up teams everywhere, but it’s pretty low tech: tiny teams of people with pans and brushes to clean up an an entire city’s devastation.

The thing that really strikes me is how enormously stupid it was, what criminal negligence it took to leave this highly explosive material right in the very heart of this city, within yards of people, their homes, their businesses. And the authorities here knew – they had been warned that these chemicals were dangerous and that they were a great risk to Beirut and Lebanon.

The ammonium nitrate – which is used as a fertiliser and as an explosive – had been in a warehouse in the port for six years after it was unloaded from a ship impounded in 2013.

The head of the port and the head of the customs authority said that they had written to the judiciary several times asking that the chemical be exported or sold on to ensure port safety.

House arrest would apply for all port officials “who have handled the affairs of storing [the] ammonium nitrate, guarding it and handling its paperwork” since June 2014, said Information Minister Manal Abdel Samad.

A French rescue team working in the city said there was still a good chance of finding survivors, two days after the explosion.

One unnamed rescuer told Mr Macron that they hoped to find a group of seven or eight people believed to be trapped in a “control room” under the rubble.

Security forces have sealed off a wide area around the blast site.

As many as 300,000 people have been left homeless by the blast, said Beirut’s governor Marwan Aboud.

Economy Minister Raoul Nehme meanwhile said the country would have to rely at least partly on foreign aid to rebuild.

“We’re not swimming in dollars,” he told Sky News Arabia.

The explosion comes at a sensitive time for Lebanon. With Covid-19 infections on the rise, hospitals were already struggling to cope. Now, they are faced with treating thousands of injured people.

Lebanon imports most of its food and large quantities of grain stored in the port have been destroyed causing fears of widespread food insecurity to come. The future of the port itself is in doubt.

The government says it will release 100bn lira (£50.5m; $66m) of emergency funds but the impact of the blast on the economy is expected to be long-lasting.

The explosion happened close to the scene of a huge car bombing which killed former Prime Minister Rafik Hariri in 2005. A verdict in the trial of four men accused of orchestrating the attack was due on Friday at a special court in the Netherlands, but this has been postponed until 18 August out of respect for the victims of Tuesday’s blast.