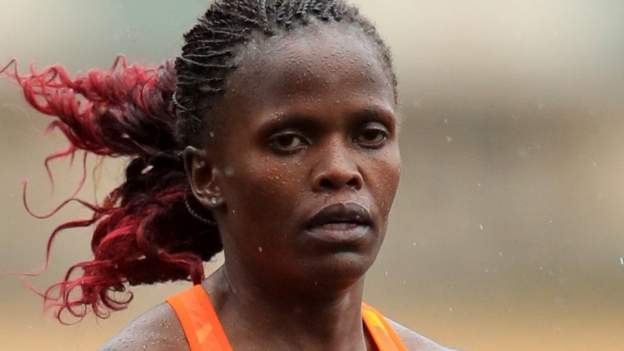 World record holder Brigid Kosgei retained her London Marathon title with a commanding performance on a wet and closed course in the city.

Chepngetich was dramatically overhauled by American Sara Hall for second.

Hall, who has promised to donate her winnings to children charities her adopted children’s native Ethiopia, sprinted clear in the final few hundred metres.

The London Marathon, rescheduled from its traditional April date because of coronavirus, is taking place over 19 laps around St James’s Park.

The usual mass participation event is happening virtually because of covid-19 restrictions, but the men’s and wheelchair elite race will follow on the specially designed course.

British runners were attempting to duck inside the Olympic qualifying time of 2:29:30,

However, Steph Twell, who reached world finals and won a European medal on the track, could not repeat her rapid time from Frankfurt last year. The 31-year-old limped out around mile 16. Lily Partridge, the 2018 British champion, also could not finish.

In their absence Natasha Cockram and Naomi Mitchell fought for the domestic title, with Cockram finishing four seconds ahead of her rival.