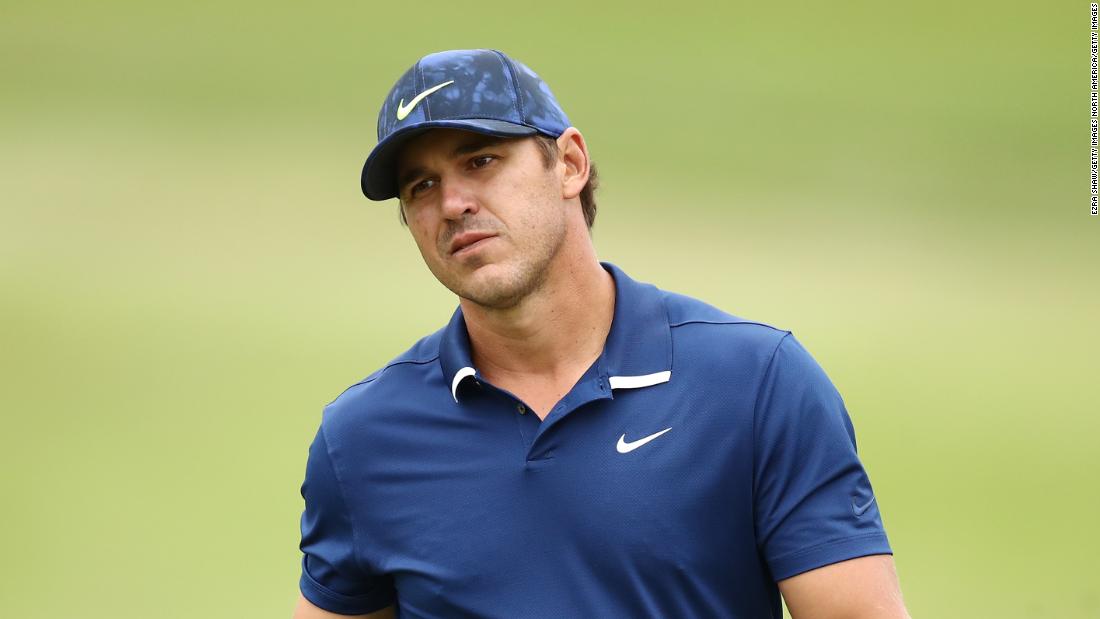 Yet that’s what the host venue for this year’s PGA Championship, the TPC Harding Park course in San Francisco, appeared to do during Saturday’s third round with Koepka enduring a horror show stretch of three consecutive bogeys — a sequence that may well have crushed the spirits and morale of many a golfer out there.

Let’s be very clear about just what’s at stake this week in California. Koepka is looking to become the first man to win the same major on three consecutive occasions since Peter Thomson triumphed at the Open Championship from 1954-56.

The 30-year-old’s response to adversity was just typical of a man who’s made no secret of the fact winning majors is the very lifeblood of his game. And nobody knows that better than his compatriot Dustin Johnson who’s at nine-under par for the tournament and will take a one-shot lead into Sunday’s final round and currently has a two-shot advantage over Koepka.

The seemingly nerveless Floridian, a ferocious competitor at the best of times, hit back in style to close with two birdies in his last three holes for a round of 69 in the process sending a very clear message to his rivals out there. One about as clear as the wink he gave towards the TV cameras the moment he sank that putt at 18.

Now Koepka is famed for his mental fortitude. He simply never lacks for confidence and he’s seldom slow in very publicly throwing down the gauntlet to his rivals.

Johnson — whose sole major title to date came at the 2016 US Open at Oakmont – – is a former workout buddy of Koepka’s having pushed his fellow American all the way during last year’s PGA Championship at Bethpage Black in New York before ultimately falling short.

Never one to shy away from speaking his mind, the two-time and defending champion says he likes his chances of winning once again, adding ” When I’ve been in this position before, I’ve capitalized. I don’t know, he’s only won one. I’m playing good. We’ll see.”

With a win Koepka would become just the third youngest player to win five majors since the Second World War and how about this for company?

He’d be behind only Tiger Woods and Jack Nicklaus. But if he is to go and seal his fifth major title he’ll have to do it in front of no fans in this the first major tournament of 2020 following the sport’s months-long shutdown due to the global Coronavirus pandemic.

Koepka — who says he’s “very comfortable around the lead in the big events” — as ever is clearly relishing the challenge, revealing “It’s going to feel completely different than any one we’ve ever played. I’m looking forward to it. It should be a fun shootout.”

For his part, Johnson knows the margin for error is small. His eight birdies on Saturday en route to a superb five-under par round of 65 marked the most he’s ever recorded in a single round at a major though more than anyone he’ll be well aware of past failures when it comes to closing out various other majors over the years including most notably at this particular event a decade ago at Whistling Straits in Wisconsin.

In fact, this is now the fourth time he’s held the 54-hole lead or co-lead at a major. On all three previous occasions he failed to go on and seal victory.

For the player known as DJ, the hunt for that elusive second major continues with Koepka wasting no time in tapping into his experiences of becoming a multiple major winner saying he feels expectation make it even more challenging.

“I guess it does become more difficult if you think you’ve played good enough to win multiple ones. But you’ve got to keep putting yourself there. I’m doing a good job of that. But the second one definitely is a little bit tougher. I think, as you can see from the top of the leaderboard.”

But Johnson — who’s now shot eight straight rounds in the sixties at the PGA Championship — feels he’s matured and now DOES have a wealth of experience to tap into especially with numerous other contenders still looking for their breakthrough major. The 36- year-old says he’s looking forward to the challenge, adding “I’ve been in the hunt a bunch of times in a major. I’ve got one major, so having that experience is definitely going to be beneficial.”

Johnson even had to overcome some adversity of his own on Saturday. His round of 65, which included a double bogey at one point, was already impressive enough but even more so when you consider he later revealed he was actually missing that most vital of components for part of his round — his yardage book, crammed full of course notes and distances.

Fortunately though for the former world number one help was at hand thanks to his brother and caddie Austin who had a spare even if it wasn’t specifically set up for Harding Park. So what did happen to the original?

“I think it’s got to be in the bottom of my bag,” revealed Johnson before then shedding more insight into the on-course escapade. ” I didn’t want to take all my clubs out on the golf course. But AJ had an extra one, so we were fine.”

Sunday’s final round should be compelling viewing. Johnson has a single shot lead over compatriots Scottie Scheffler and Cameron Champ while some big names and previous major winners are lurking with intent amid a congested leaderboard.

In addition to Koepka at seven-under, England’s Justin Rose is just three shots back as is Australia’s 2015 champion Jason Day and big-hitting Bryson DeChambeau, who drained a monster 95-foot putt on his way to a 68.

Third round leader Haotong Li of China slipped to a three-over 73 but is still in the hunt, four shots off the lead.

Meantime another disappointing outing for American great Tiger Woods who finds himself at two-over par for the tournament following a third round 72.

The 44-year-old is currently 11-shots back and acknowledged that adding to his tally of 15 majors is getting increasingly difficult with the likes of Koepka and Johnson in their prime.

“It is getting tighter and harder to win events,” he said.