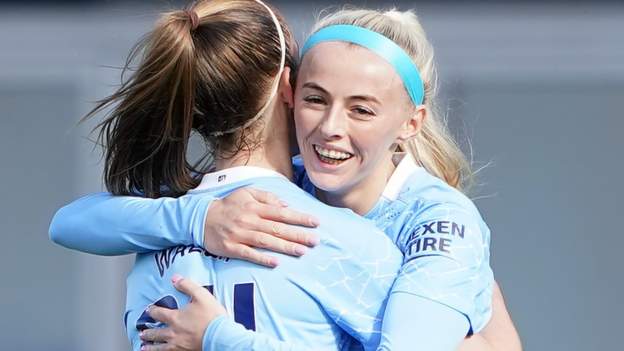 England winger Kelly curled in a superb opener from outside the box in a first half the FA Cup finalists dominated.

Kelly doubled the lead from the spot after half-time before United States midfielder Sam Mewis quickly netted her second goal in four days for the club.

Ellen White headed in a fourth and Anna Filbey flicked in a late Spurs goal.

Spurs fans were made to wait a little longer for Alex Morgan’s debut, with the United States forward not featuring on Sunday as her bid to return to full fitness continues.

Morgan, 31, has not played in a competitive game for over a year, having given birth to her daughter on 7 May.

Her side were up against an in-form Man City team who also beat Arsenal in the Women’s FA Cup semi-finals on Thursday.

The hosts hit the woodwork three times, on top of their four goals which included a first of the season for England striker Ellen White, as she showed good agility to angle a header home after Steph Houghton’s far-post flick-on.

The result left City with seven points from a possible nine in the league so far, while Spurs have one point from their opening three games.