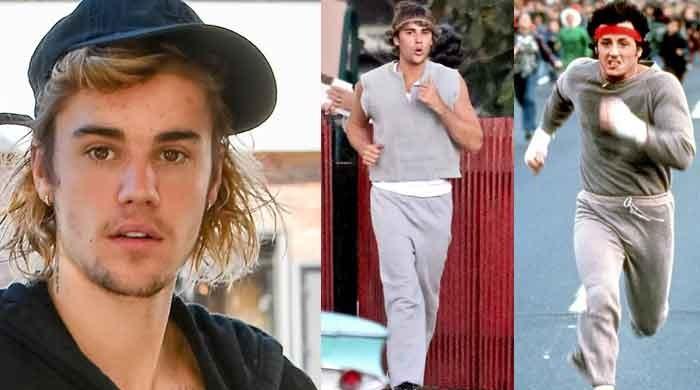 Justin Bieber looked smashing as he was seen filming a music video with a ‘Rocky Balboa’ vibe  – totally reminiscent of the 1980’s classic.

It seems that the Canadian crooner is about to deliver another music video as he appeared in Los Angeles on Thursday.

The ‘Lonely’ singer was serving some serious ‘Rocky’ vibes in photos from the set of his latest music video. The pop star even covered up his famous arm tattoos.

The pop star was also spotted jogging down the road and practicing some boxing moves,  his  wife Hailey Baldwin was laso seen on the set as well, hanging out behind the scenes while Justin filmed his scenes.

Justin totally channeled Sylvester Stallone’s Rocky Balboa as he sported a grey tracksuit featuring a sleeveless sweatshirt and matching pants, along with a white headband.

The singer  seemingly paid homage to the famous beach training scenes between Rocky and Apollo Creed, played by Carl Wathers, in the 1982 hit ‘Rocky III’.   Justin  proved just how serious he was about getting into character.