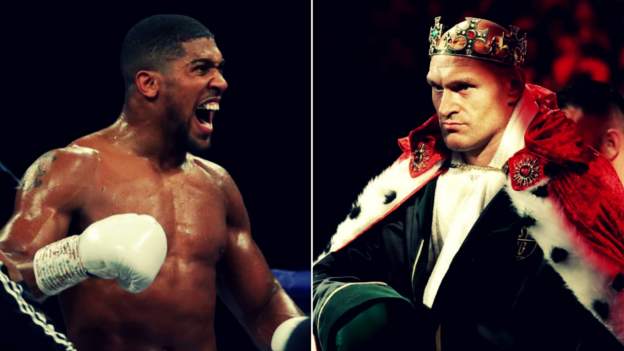 The sporting world longs for Anthony Joshua and Tyson Fury to throw punches at one another in the boxing ring. They already have.

For while Joshua’s win over Kubrat Pulev on Saturday intensified calls for him to face Fury in 2021, the pair actually tussled in 2010.

On his way back from the gym, Fury – who was 22 at the time and a professional – called Steve Bunce at BBC Radio London and explained what Joshua – who was 20 and chasing amateur honours – was like.

Now that the Joshua-Fury rivalry has reached a new level, BBC Sport boxing correspondent Mike Costello describes Fury’s words from a decade earlier as “gold dust”. Here they are.

“To be honest with you I thought ‘I’ll only take it easy because he’s only an amateur and he probably wont spar me again if I go mad’.

“He rushed out at me, he threw a one-two and left hook and bash, he hit me with an uppercut right on the point of the chin.

“If I’d had a weak chin like David Price I’d have been knocked out for a month. He’s very, very, very good and he’s only young. Watch out for that name, Anthony Joshua, he is one prospect for the future.

“I’m a good prospect, I rate myself as one of the top heavyweights in the world and he came at me for three rounds and he gave me a beating. I am not going to deny it. He gave what for, hell for leather. I thought an amateur is killing me.

“I slowed him down with a few good body shots. The kid is only 20. I’m a handful myself, so for him to put up a good performance like that against a top prospect in me, I think he’s one for the future.

“But sparring isn’t fighting and fighting with a head guard is not professional boxing.”

Will they fight for real?

Sparring is indeed very different to the kind of pressure and occasion the pair would face should they meet for real, with all four heavyweight world titles potentially on the line.

Their promoters have already raised the prospect of a May contest – possibly in the Middle East – but there are a number of issues to resolve first ranging from bypassing other potential opponents to securing a suitable venue during the Covid-19 pandemic.

For this proposed fight, I see boxing problems, not so much problems with things like broadcasters.

There’s a WBO problem and Joshua being mandated to fight Oleksandr Usyk. Then there’s the Deontay Wilder third fight for Fury. Wilder invoked that clause and they were meant to fight for a third time last July.

The other problem is the straight forward normal boxing chaos like people getting involved and getting busy. It will take a lot of nerve and skill to get this from a plan into a reality – an awful lot of skill from some seasoned personnel.

So, Mike, is your gut feeling telling you it will happen by May or June?

Yes. Because of the sentiments of Eddie Hearn, Bob Arum and the fact there’s nothing veiled in the comments of Joshua and Fury. I am as close to certain as I can be that this happens if there are no impediments from governing bodies or a legal situation.

I think there’s a time issue. If this fight is to be staged in the Middle East, Ramadan is mid April to mid May. So it’s then the end of May into June for any fight to be held.

If you look at the temperatures there at that time of year, it’s going to be very difficult to hold those kind of events then. That could be a factor.