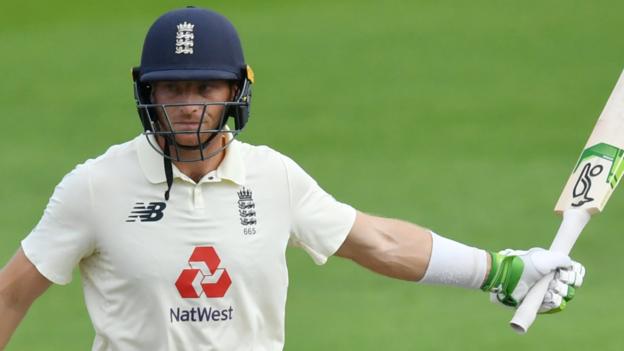 Jos Buttler said he felt like he owed his match-winning innings to England after his wicketkeeping errors earlier in the first Test against Pakistan.

He dropped a catch and missed a stumping off Shan Masood, allowing the opener to go on to make 156.

“If I take those chances, we’re not chasing 277,” Buttler told Test Match Special. “I know it’s not good enough.”

Buttler, 29, also committed a costly drop of Jermaine Blackwood when England were beaten by West Indies in Southampton in July.

“I know if I’m going to continue to be a wicketkeeper in this team I have to be better,” added the Lancashire man.

“As a wicketkeeper there is nowhere to hide. It’s tough for anyone who drops a catch. It’s one of the worst feelings in cricket.”

As well his struggles with the gloves, Buttler had been experiencing a lean spell with the bat.

However, after making 67 in the third Test against West Indies, Buttler battled to 38 as England struggled in the first innings against Pakistan at Emirates Old Trafford.

When he was joined by Woakes on day four, the hosts were 117-5, 160 short of their target on an increasingly difficult pitch.

They took the attack to Pakistan, and though Buttler was out with 21 still required, Woakes completed a famous three-wicket win.

Buttler, though, admits his runs do not mask his errors with the gloves.

“It still doesn’t change the role of wicketkeeper,” he said. “You’re expected to take those chances, especially at this level.

“They can be match-changing. I found it tough. I found it hard to shut out. I know if I’m going to continue to be a wicketkeeper in this team I have to be better.”

“That’s why he is in our team, for those situations,” said Root. “He has been in those pressure situations before and he knows how to deal with it. This could be a real stepping stone for him in his career.”

Root did admit that Buttler’s errors could have been costly and that England will review them.

“It’s something we’ll look to learn from, as we always do,” he said. “There has been a number of things we can take from this game that we can look to get better at.”

Buttler’s innings came a day after his father was taken to hospital.

John Buttler had previously suffered a number of health scares and was admitted on Friday evening, not going any earlier in order to watch the cricket.

After having scans, he returned home on Saturday.

Of Jos, Root added: “I’m sure it was very difficult for him not to think about. For him to deal with that and still play in that manner was exceptional.”